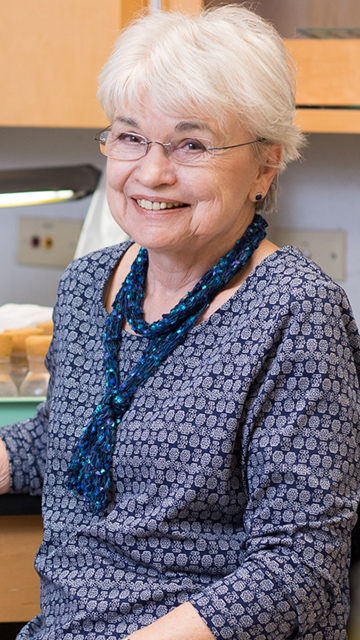 Professor of Biology Mary Murnik has been chosen as the recipient of the 2017 Diversity Enhancement Award for her significant contributions in fostering diversity and inclusion at Ferris State University.

Assistant Dean for Collections and Access Services Leah Monger wrote in her nomination letter, “Mary has been a champion for women and social justice at Ferris since she was hired as the first woman to head the Biology Department in 1980.”

“Mary was a pioneer in fostering dialogue about diversity issues at Ferris…and [has] worked tirelessly and diligently to facilitate difficult conversations and lay the groundwork for the creation of the Senate Diversity Committee and the grass roots Diversity Counts! Initiative,” said Monger.

“Starting early in her career, before she arrived at Ferris, Mary has been a champion for equity and diversity,” wrote Associate Provost Roberta Teahen in her letter of recommendation. “Mary exemplifies a commitment to diversity in her teaching, her service, and her continuing leadership efforts at Ferris and in the larger community. She models this through building positive personal and professional relationships with varied Ferris constituencies.”

Murnik co-founded the Ferris Professional Women organization which supported and advocated for women employees as well as mentored student leaders. She has served in many positions and continues to be very active in the community's American Association of University Women (AAUW) which raises money for student scholarships and supports professional women. From 1985-2014, Mary helped organize Take Back the Night annual events in Big Rapids and on campus to raise awareness to end sexual, relationship, and domestic violence in all forms.

While Murnik is known for being an exceptional mentor and role model to both men and women, as a geneticist, she has a heart for guiding women in traditionally male-dominated STEM fields. Murnik was pivotal in establishing a student chapter of the National Organization for Women (NOW) at Ferris in 1987 where she still serves as the faculty advisor. She is also the faculty advisor for the Ferris Pre-Dental Club and served for many years as the faculty advisor for Zeta Phi Beta, a primarily African-American social sorority. Murnik also mentored female students from 2001 – 2011 as a member of Select 60, a campus organization of women faculty and administrator mentors.

Mary has received numerous awards. She received the Ferris Distinguished Teacher Award (2007) and Michigan Association of Governing Boards' Award for Teaching Excellence (1998) for her commitment to students. She also received Ferris' Dr. Martin Luther King Social Justice Award (2004) for her advocacy for diversity on campus and her advising and mentoring of female students. As further evidence of her commitment to women and students, Mary was recognized and honored as the Ferris Professional Women ‘Woman of the Year’ (1998).

Murnik earned a Bachelor of Science in Zoology and a PhD in Zoology (Genetics) both from Michigan State University.

Murnik and other recipients of the 2017 Academic Affairs Awards were recognized on Tuesday, April 25, 2017, at the Employee Service Awards in the David L. Eisler Center.