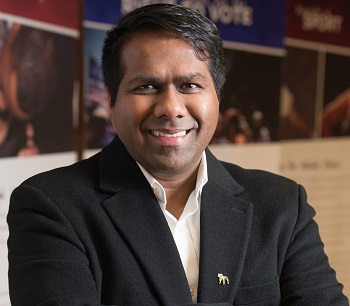 The Diversity Enhancement award recognizes an individual who demonstrates a significant commitment to enhancing diversity and harmonious relationships within the University. Piram Prakasam, Director of the Office of International Education, has been chosen as the recipient of the 2015 Diversity Enhancement Award.

In his letter of recommendation, colleague J. Randall Groves writes, "I have worked with Professor Prakasam [for] several years now on various projects, and I have always been impressed with his commitment to diversity. The last few years I have worked with him primarily on the Beyond series for the International Office and every year we have made a distinct attempt to incorporate the notion of diversity into the events." Groves writes, "Piram's commitment to diversity does not only come out in special events. The motto of the International Office is the African philosophy of Ubuntu's 'I am who I am because of who we all are,' which speaks to the deep interconnections between us in spite of our diversity."

"My diversity work at Ferris State University is shaped by my teaching philosophy that is rooted in the vision and values I strive for in my personal and professional life... [which can be] summed essentially into two words: dignity and purpose," says Prakasam. "My work is shaped by the idea that our work as educators is to deliver on the promise of uplifting human dignity and creating thoughtful global citizens."

Since 2008, Prakasam has coordinated a number of events. He was the Globalization Initiative Coordinator (2008-2010), a member of the International Education Taskforce (2010-2011), on the Office of Diversity and Inclusion’s Inclusion Council (2010-11), campaigned successfully to include the world Globalization in the general education philosophy, and many more activities. In spring 2011, he was awarded the Dr. Martin Luther King Jr. Social Justice Award for his Globalization Initiative work at Ferris.