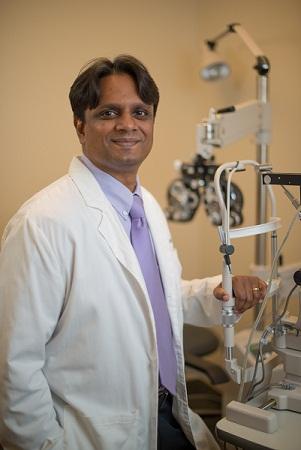 A commitment to education, the development of critical courses and research are among the reasons that Dr. Avesh Raghunandan was named the winner of Ferris State University’s 2013 Distinguished Teacher Award.

“Avesh is an excellent educator and has done outstanding work in developing the vision-science courses, which are part of the basic science curriculum of MCO,” said Dr. Vandana Rajaram, a colleague from the Michigan College of Optometry at Ferris, who also noted that his use of in-lab technology has strengthened the education of MCO students. “To say that Avesh has complete command over his subject areas would be an understatement. Even more significantly, he has excelled in didactic and clinical instruction as evidenced by his high student and peer evaluations.”

Raghunandan began the MCO portion of his professional career in 2006 after previously serving as a teaching assistant at the University of Houston’s College of Optometry. In 2009, he was promoted to associate professor of Vision Science and, in 2012, Raghunandan was appointed as the co-coordinator for the senior research project course.

Awarded tenure at Ferris in 2010, Raghunandan was admitted as a Fellow of the American Academy of Optometry during the same year. In addition to the numerous grant awards he has secured, Raghunandan earned the 2011-12 Michigan Optometric Student Association Choice Award for Outstanding Professor. His commitment to original research has led to the development of a variety of activities and the publishing of his research findings in peer-reviewed journals. Raghunandan has presented his research within MCO and at national conferences. He has worked to strengthen collaboration with international education programs.

“I subscribe to the philosophy that research is an extension of the classroom learning, and should not be considered as an independent academic activity,” said Raghunandan, who lives in Rockford. “While classroom and lab learning are geared toward the dissemination and acquisition of a specific set of knowledge and skills, research provides an opportunity for students to engage in a process that encourages innovation, analytical reasoning, an appreciation for scientific discipline and the reward of generating new knowledge.”

Raghunandan’s research efforts earned him even greater respect from his colleagues. “Avesh is actively engaged in original research, which has led to his involvement in various professional development activities including publishing research findings in peer-reviewed journals, research presentations within MCO and at national conferences, collaborations with international educational programs and acquiring research grants to name a few,” Rajaram said. “He has been a participant in the Ferris Faculty Research Committee which has promoted the teaching-research nexus at Ferris.”

“I recruit Optometry students to work with me in my lab during the summer of their first year and in subsequent semesters on projects that relate directly to the core concepts they are exposed to in their vision science course,” said Raghunandan, who earned one degree apiece from the University of Durban-Westville, in South Africa, and the New England College of Optometry, in Boston; and three degrees from the University of Houston, in Texas. “I also augment this by assisting students with their senior research project, specifically those students interested in conducting research in my relevant area of interest.”

Ferris has a strong line of faculty winners of the Distinguished Teacher Award. The latest inductee into this teaching fraternity of excellence is a deserving one, according to a colleague.

“The quality of his lecture notes far surpasses that of the content within the Vision-Science required texts,” Rajaram said. “Avesh Raghunandan is an outstanding educator, an accomplished researcher, a true academic and very worthy of this award.”