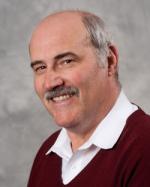 Being named the Distinguished Teacher was gratifying for Richard Goosen who sees himself as a down-to-earth teacher who is dedicated to the success of his students. Goosen, a professor in the College of Engineering Technology, was named Ferris State University's Distinguished Teacher Award winner for 2009-10.

"From the student evaluations and their comments, as well as the class visitations from the committee members, it was clear that Dr. Goosen is truly a distinguished faculty member at Ferris State University," said Khagendra Thapa, committee chair. "He works very hard to ensure that students in his class understand the material he teaches. Dr. Goosen goes out of his way to help students learn the material and they are properly advised so that they can graduate within a specified time period."

"I was humbled and surprised because I view the Distinguished Teacher Award as the most significant and meaningful award we give at Ferris because it is focused specifically on teaching," Goosen said. "It was really quite an honor. If you ask me what it is I did to get this honor I would say, 'I teach.' When you receive positive reinforcement on what you consider your mission in life to be, it winds up being a very good thing."

Goosen has been an assistant professor at Ferris since 1993 and has served as coordinator of two CET programs since 2009. As an assistant professor, he teaches courses in engineering technology related to engineering science and mechanical design. As coordinator of Ferris' Product Design Engineering Technology and CAD Drafting Tool Design programs, Goosen provides administrative support in addition to teaching responsibilities.