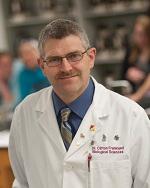 Clifton Franklund is a self-professed nerd. He is also one of the most respected professors at Ferris State University, where he has been honored with the 2011-12 Distinguished Teacher Award.

“I like science, technology and science fiction,” said Franklund, an associate professor of Biology at Ferris. “I try to incorporate those interests into my classes to enhance my students’ comprehension.”

One of his favorite sets of lectures involves using “The Lord of the Rings” to illustrate the nature of the immune system.

“I bring it all to class with a dry sense of humor – lame jokes, bad puns and all,” Franklund said. “I don’t mind if my students groan. At least I know they’re listening.”

Franklund, who also coordinates Ferris’ Biology program, is greatly admired by his students and his peers. Franklund received the university’s prestigious award this spring during the annual Employee Service Award Celebration in the Rankin Student Center Dome Room.

“I’m pleased and honored,” Franklund said. “And a little intimidated – I greatly admire and respect the individuals who have previously won this award.”

Franklund, who has been employed at Ferris since 2006, was the choice of the Distinguished Teacher Award Committee, chaired this year by Adnan Dakkuri, a professor of Pharmaceutical Sciences in the College of Pharmacy. The recipient is selected after a lengthy process of extensive evaluation that includes classroom visits, student input, evaluation of semifinalist essays and curriculum vitae, and interviews with finalists.

“The Distinguished Teacher Award at Ferris State University is the most coveted recognition of faculty at FSU,” Dakkuri said. “Dr. Clifton Franklund has admirably met all of these conditions based on the judgment of the selection committee.

Student input impacts the committee’s decision significantly, he said, quoting one student’s comments: “Dr. Franklund works very hard to make sure his students understand the material. He doesn’t just teach micro, he also teaches his students how to be better test-takers and how to use our time wisely. He is always busy trying to make his course better.”

“Our institution is proud to have among its professoriate individuals of high caliber who are committed to excellence in teaching and to advancement of higher education,” Dakkuri said. “Dr. Franklund truly represents these faculty members.”

Franklund teaches microbiology courses to about 200 students each semester. Most of them are students in allied health associate degree programs or in a clinical laboratory science program. He prefers to see his role as a coach rather than a content expert.

“I tell all of my classes that microbiology is more than a mere assemblage of arcane facts with Latinized names,” he said. “It is both a method for exploring the interactions within and between living systems and a way of understanding the material world in which we live.

“The only way to truly teach microbiology, and the only way that it can be learned, is to emphasize and understand these interactions … I try to make it practical. Microbes impact our lives every day – whether you are in the drug store, grocery store or just reading the newspaper, you will find that microbes are literally all around us. The things students learn in my classes are things they will use for their entire careers.”

Franklund’s interest in science began in fifth grade, thanks to an inspiring teacher. He started experimenting in a makeshift chemistry lab in the basement of his home and “accidentally discovered how to produce chloramine gas as well as other less-potentially deadly compounds.”

Franklund earned a Bachelor of Arts degree in Biology from Concordia College in Moorhead, Minn., a Master of Science in Bacteriology from North Dakota State University in Fargo, N.D., and a Ph.D. in Microbiology and Immunology from the Medical College of Virginia in Richmond, Va.

“I didn’t really get what science was all about until graduate school, and then the light went on,” he said. “Like my students, I was focused on learning the facts and procedures at first. In graduate school, I was finally able to do science instead of learning about it.” He moved to Big Rapids in 2006 following six years as an assistant professor at California State University in Long Beach, Calif.

“We wanted to be part of a smaller community again,” said Franklund, who grew up in Minnesota. “I went from a town of 200 to a city of 10 million and working at a university with 36,000 students … Big Rapids is the right-size town for us and a wonderful place to live, and Ferris is the perfect-size college. Our school is small enough to really get to know the students while still large enough to support a variety of activities and some great sports teams.”

Franklund speaks highly of colleagues in the Biology department at Ferris, and admires the work done by the university’s Faculty Center for Teaching and Learning, facilitated by director Todd Stanislav.

“The Faculty Center is an excellent resource for people who choose to use it,” Franklund said. “It has given me an opportunity to meet faculty and staff from across our university and to hear what other people are doing in their classes. It is a great place to share ideas, and I know that it has made me a better teacher.”

He’s also a big fan of his students. “We have really terrific students at Ferris,” Franklund said. “Ferris is part community college, part general studies, part liberal arts, part vocational school … and it’s a comprehensive university. With such a mixture of programs, we attract a very diverse student body. Perhaps we are not as racially or ethnically diverse as some colleges, but I cannot think of a school with more diverse academic programs than Ferris.”