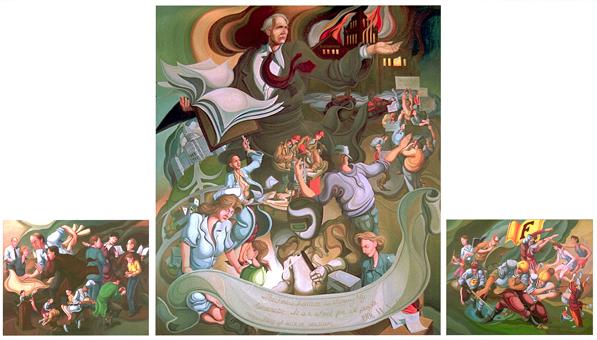 The historical, allegorical painting of Ferris State University...in the words of the artist

My goal with this triptych and the 50 figures that compose its subject matter was to celebrate this human environment at this unique university. I wanted to tell three separate Ferris stories that would combine into one visual statement.

When plans were being drawn up for the atrium that would join the Starr and Science buildings into the Arts, Sciences and Education complex at Ferris State University, I was approached about creating a "substantial statement of the arts" for that atrium. I accepted, feeling it was time the arts contributed something of value to the University; the responsibilities of an art teacher don’t end in the classroom. That decision provided me the most interesting and difficult challenge in my art career.

The initial design of the triptych was determined by the architectural shape of the atrium wall that would support it. The University architect used CAD CAM software to explore various options for using space in the atrium. He was really creative. We ended up with a giant, inverted "T" shape that suggested the possibility of a mural. However, I didn’t want to do a true mural—that is, apply paint directly to the wall—because I felt the art would have too short a life span. Instead I decided to create a free-hanging painting on a stretched canvas that would fill the available space. My goal was to somehow control the room visually.

The design in figurative action and background flow would need to be created in such a way that all three separate panels fit together as one large painting, with each panel maintaining its separate content and characters. This large design flow concept proved to be the most difficult challenge, particularly because each panel was painted in a different physical location.

The images on the canvas needed to be about Ferris in an historical perspective, but with a contemporary look at FSU. I wanted to show the emotional side of the University and include some of the turmoil Ferris has come through, such as faculty strikes. This kind of passionate involvement is, in my 20 years’ experience, unique to Ferris.

A university is a contained environment that, if we do our jobs, evolves individuals into creative, free-thinking professionals. Good public art impacts by what I call aesthetic osmosis—you absorb a little something each time you walk past an effective piece. I wanted the triptych to instill a sense of pride and heritage in its viewers, to give them the sense of Ferris being a special and unique place.

Most importantly, the painting needed to be about the students. The center panel highlights the history of Ferris, while the right panel features such extracurricular activities as sports, cheerleading, band and theater. The left panel is dedicated to those contemporary individuals who, through effort, investment, and conviction, have begun to guide and direct Ferris into the next century.

Although most of the figures in the center and right panels are fictional characters, their gestures, physical features, and posture represent, to me, particular individuals at Ferris. 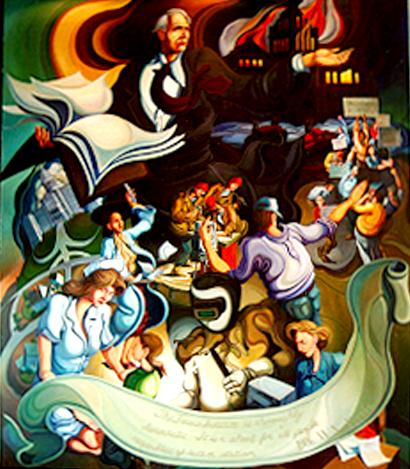 The Ferris Institute is thoroughly democratic. It is a school for all people, regardless of race or station. -- W.N. Ferris

The center panel serves as the triptych’s anchor and is the artistic equivalent of a perpetual motion device. The lower section of the panel has an implied circle created by the gesture and clothing folds of the nine figures involved. This circle creates an illusion of continuous movement. To compromise some of the action, I chose to bring the central figure of that canvas, Woodbridge N. Ferris, the University’s founder, into the circle as a large cross shape. This figurative cross slows down the implied movement created by the implied circle and allowed me the opportunity to illustrate my belief that good educators are similar in some ways to good evangelist preachers. I didn’t want a stiff, classical figure with some proverb sitting on his lips. This was a very accomplished man who’d done some extraordinary things. His tenure as U.S. senator and governor of Michigan was very important to the history of the school.

The panel’s largest figure is the president; proportionately, people are scaled down from there to create the illusion of space. The effect is intentionally more surrealistic than true; I don’t believe photographs can create the emotion that distortion can and I wanted an emotional statement here. My work is storytelling oriented—it’s purposely open-ended so individuals can make up their own stories. That’s the beauty of work that isn’t defined in precise, representational terms. 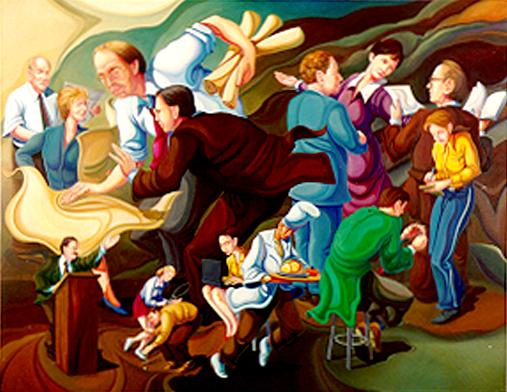 This panel was a big struggle. It just seemed too safe, too predictable; it was difficult to work on it for long stretches of time. I finally decided to make a statement about Ferris State’s struggle to reinvent itself during the dark times of lowered enrollment, program restructuring, and the strikes but with a clear agenda of rebuilding the University.

Bill Sederburg is a growth president. I painted him with two of his vice presidents in terms of positive action. They’re looking over construction plans, but instead of using the traditional blue of blueprints, I did the architectural drawings in tan and cream—colors that hint of a treasure map. This sort of growth is an adventure, a treasure, if you will. 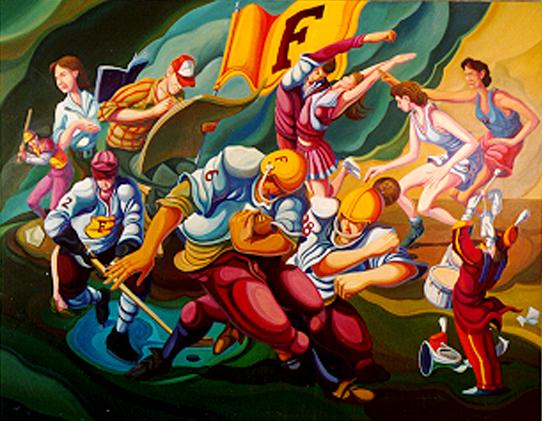 The "Activities" panel addresses the tremendous sports history of FSU. Sports in themselves are very dramatic and emotional, so this was the easiest panel to create. I put the football players in practice uniforms rather than game uniforms because, to me, that’s where the heart of the sport is—out on the practice field, day after day—that’s where the real work is done.

The cheerleaders were, of course, perfect for my style of animated painting. And the panel speaks a tiny bit to the arts.

The finished work measures 33 feet in length; the center panel is 20 feet tall and each side panel is 9-by-7 feet. Once you get a painting that large, detail becomes irrelevant. The observer must stand back far enough to really take in the whole picture. I had to learn to redefine my style. The end result is vaguely close to the drawings I’d done, but I added a number of changes. As I painted, the work took on a life of its own, and, of course, that’s the excitement of it.

During the 1600 or so hours it took to paint the triptych, I often had an audience. Art is a construction process—people are frequently as interested in the doing as they are in the finished product. Students would drift in to ask me a question about class, then just sit quietly and watch me work for an hour or two. Football players and cheerleaders who’d finished practice nearby would do the same—just watch the painting process.

It turned out to be a fun, technical challenge. Completing a project of this size was as much a feat of engineering as of art. The physical requirements of this painting presented one challenge after another. Finding a large enough canvas, building a stretcher that would not only contain it but expand and shrink with the cotton fabric of the canvas, finding a place to work on it, the gymnastics required to actually paint it, and moving an 18-by-21-foot painting to its final location—each step of the way required collaborative problem-solving.

The FSU Facilities Management put considerable effort into designing a roller and setting up its crews to move the canvas—a task unto itself. This may be the first time a painting of this size has been moved. Taking the painting off the stretcher, rolling it up, moving it to the Arts, Sciences and Education building, placing the painting back on the stretcher and standing it up was a 15-hour process. We started at 9 a.m. and finished at midnight. The day was a good example of how well this University works when given a task.

The completed work should be beyond me—I made it; I was the carpenter -- but "The Visionary" should speak to Ferris somehow in this unique place in this unique time. Art doesn’t have to be dramatic; it doesn’t have to be on the cover of Life magazine to change the way people think about themselves, about their heritage. I can’t wait to come back to Ferris 20 years from now and see what sort of impact all of this has made.

Robert L. Barnum, associate professor of Fine Arts at Ferris State University, embodies the attributes portrayed in each panel of his triptych that now graces the atrium of the Arts, Sciences and Education building. He is a visionary in the same sense as Woodbridge N. Ferris, a mover and a shaker just as the figures represented in the left panel of the painting, and a stalwart supporter of the campus activities featured in the painting’s right panel.

The point man of the Ferris Renaissance, Barnum has had considerable influence in shaping the aesthetic feel of the Big Rapids campus. In addition to documenting the University’s history on perhaps the largest free-standing canvas in the nation, he was the moving force behind the idea of a Michigan Art Walk.

Barnum carries a national reputation in the world of modern art. He has competed in juried competitions and exhibitions throughout the United States. His work is a part of the collections of Lincoln National Corporation in Fort Wayne, IN; Idaho State Bank, Pocatello, ID; Illinois State Permanent Collection, Springfield, IL; David P. Tonnemacher, South Pasadena, CA; and Veterans Memorial Library, Mt. Pleasant, MI. Barnum has been featured in The Newleader (June, 1991); The Creative Artist (1990); and American Artist magazine (July, 1988).

His style is one of sweeping motion in the tradition of "regionalism," a movement that grew in the U.S. from the early 1900s to World War II. His preferred medium is watercolor; however, he chose to do "The Visionary" in oil.

Barnum has been a member of the Ferris faculty since 1989. He arrived in Big Rapids after a five-year career at Columbia College in Chicago. Barnum holds a bachelor of science degree from Southern Oregon State College and a master of fine arts from Idaho State University.

I had the good fortune of growing up in typical middle-class America. Our family was in the construction business. Working summers, weekends, and school holidays in this blue-collar, male-dominated environment offered me a unique education. I was amazed at how fast these common, everyday Joes could change the face of the earth with enough muscle and equipment.

My interests and goals for the last 10 to 15 years have been quite simple. My goal is documentation. Not the kind of realistic, stop-action, image a journalistic photographer might seek, but nevertheless a form of documentation.

I simplify what I paint, reducing everything to its most graphic and simple form and color. I’m not interested in portraiture; I try to move away from faces in the sort of content that facial expressions might create, instead delivering general information that’s more animated and really deals with the whole figure as a moving force.