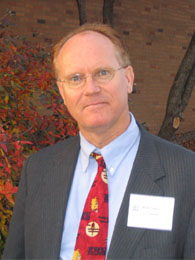 Richard Sauve, who holds a 1983 bachelor's degree in Surveying from Ferris State University, is an international Global Positioning Systems surveyor. Currently a technical sales representative for Leica Geosystems, Inc., based in Heerburgg, Switzerland, the support Sauve provides his clients has earned him the company's Heinrich Wild Sales Excellence Award each year from 1998-2004 in recognition of his sales, which were the highest above target in the western hemisphere.

Sauve's expertise in surveying has allowed him to work on projects around the world, from Algeria to Norway, Chile to Iran and Abu Dhabi to Beijing -- not to mention many projects in the United States. He is also a leader in national efforts to establish Continuous Observation Reference Stations, a project that will help establish new world standards for navigation and precise positioning.

A member of the Michigan Society of Professional Surveyors, MSPS has recognized Sauve with their Presidents Award in both 1999 and 2002.

Sauve is a frequent guest instructor for Ferris' Surveying Engineering Technology program, teaching students how to use the latest surveying technologies. Through his advocacy and activities with students, Ferris program has enjoyed more then $1 million in support, including equipment, accessories and monetary contributions from Leica Geosystems -- now a member of the Ferris State Phoenix Society. Sauve helps the student chapter of the Burt & Mullet Surveying Association and the Sigma Lambda Surveying Honor Society.

As a result of the efforts of Leica Geosystems, Inc. and Richard Sauve, Ferris' Surveying Equipment Lab is one of the best equipped in the world. Integrated with the fine curriculum and professional instructors, this technology supports Ferris' world-class undergraduate Surveying Engineering program.