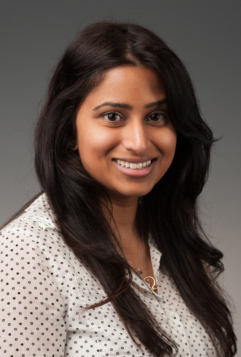 Dr. Stephanie Ramdass is the Clinical Research Fellow at the Michigan College of Optometry. She completed her bachelor’s degree in Human Biology at the University of Toronto, Canada in 2005. She gained invaluable pre-optometric experience working in a busy Toronto private practice before pursuing her master’s degree in Biomedical Sciences at Rosalind Franklin University of Medicine and Science in North Chicago in 2009, followed by her Doctorate of Optometry at the Inter American University of Puerto Rico School of Optometry where she graduated top of her class in June, 2013.

Her rotations during fourth year were at the Inter American University of Puerto Rico School of Optometry’s various satellite clinics throughout Puerto Rico, the Malcolm Randall VA Medical Center in Gainesville, Florida, and a private practice in Brooklyn, New York. She was involved in many student organizations while in optometry school including SVOSH, AOA, AOSA, COVD, and AAO. Over the four years, she also held several leadership positions within student council and received various clinical, voluntary, and academic awards including VSP and Walmart scholarships. After that Stephanie completed a residency in Cornea and Contact Lens at MCO. Current membership affiliations include AAO and Beta Sigma Kappa Optometric Honor Society. Dr. Ramdass plans to pursue fellowship in the American Academy of Optometry and would like to enter either private practice optometry or an MD/OD practice with a focus on specialty contact lenses upon completion of her fellowship.