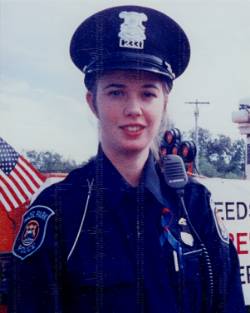 Officer Jessica Nagle-Wilson was shot and killed when she responded to an animal complaint at a house on Jarvis Street at 2048 hours.

As she exited her patrol car, a man standing on the porch suddenly opened fire on her with a shotgun filled with No. 6 birdshot, striking her in the face, neck, and stomach. She was able to return fire and wounded the suspect. Although she was wearing her vest she suffered fatal wounds and succumbed to her wounds at the hospital.

The suspect was taken into custody at the hospital. The man was convicted of Officer Nagle-Wilson's murder in July 2003 and sentenced to life in prison.

Officer Nagle-Wilson had been a member of the Hazel Park Police Department for just under two years, and is survived by her husband, who is also a police officer, parents, brother, and sister.