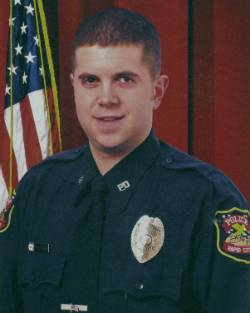 Officer J. Ryan McCandless and Officer Nick Armstrong were shot and killed as they and another officer questioned four suspicious subjects at the intersection of East Anamosa and Greenbriar Streets at about 4:30 pm.

After several minutes a male subject in the group pulled out a concealed handgun and opened fire, striking all three officers before being wounded by return fire. The subject was shot and fatally wounded.

All three officers were transported to a local hospital in critical condition. Officer McCandless was pronounced dead shortly after arrival at the hospital, and Officer Nick Armstrong succumbed to his wounds five days later.

Officer McCandless had served with the Rapid City Police Department for six years. He is survived by his fiancée, parents, and sister and is buried in Midland City Cemetery, Midland, Michigan.