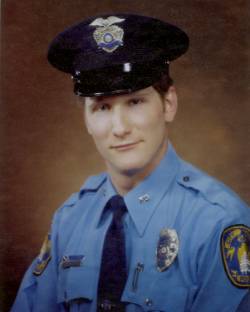 Officer Whitehead was killed when he was struck by the main rotor blades of a helicopter after a crash landing. He and his partner were on air patrol when they spotted a burning motor-home on I-96.

After fire units arrived on the scene they began to ascend, but the helicopter struck electrical lines which crossed over the median. The helicopter descended rapidly and struck the ground. As both officers fled the aircraft Officer Whitehead was struck by the rotor blades, killing him instantly.

Officer Whitehead had served with the agency for 7 years and had served in law enforcement for a total of 9 years. He was survived by his wife, parents, and three brothers.