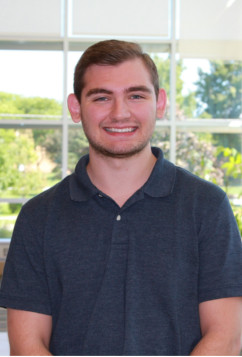 Bret Williams is from Chesterfield, Michigan. He completed his undergraduate studies at Macomb Community College and Ferris State University, where he was an active member of the Honors Program and the Ferris State Pre-Optometry Club.  He will be earning his bachelors degree in Vision Science after his first year of optometry school at the Michigan College of Optometry, where he is a part of the graduating class of 2020.

He started wearing glasses when he was just four years old due to a severe astigmatism, so he frequently visited his optometrist and looked forward to every visit. As he grew up, he became fascinated with the exam equipment and the eye itself, sparking an interest in the field. When he became of age he started to wear contacts and that was a dramatic change in his life. He also loved learning about optics in his high school physics class, and realized that optometry was the profession he should be in. After shadowing many hours in the college’s clinic, he realized just how important a person’s vision is, and wanted to make a difference in his future patients life. When he completes optometry school, he would like to specialize in low vision to help those who need that extra care to carry out a normal day to day life. In his free time, he likes to spend time with friends, family, and watch ‘Law and Order: SVU’.