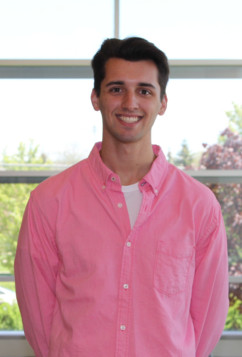 Ryan Chrencik will be entering his fourth year in the Pre-Optometry Program at Ferris State University. He is a graduate of Gaylord High School and decided on earning his degree in optometry while attending. Ryan’s interest in science and interacting with people as well as a fascination with the eye sparked his attention to optometry and after some job shadowing, he ultimately decided it was the field for him. Ryan plans on graduating with a Bachelor’s in Biology in the spring of 2017 and to attend optometry school that fall. After graduating, Ryan plans on gaining experience in multiple workplace environments and hopes to have his own private practice in the future. Ryan is in the Honors Program, an active member of the Pre-Optometry Club, and president of the Table Tennis Club at Ferris State. He is continuously volunteering inside and outside the University. Ryan is an avid golfer, basketball player, and skier and loves to play guitar, piano, and mandolin.