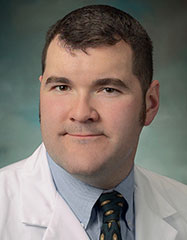 Shaun Phillips is assistant vice president of Clinical and Ambulatory Services at Bronson Battle Creek Hospital. His professional achievements include being selected for the American Society of Health Systems Pharmacists’ Pharmacy Leadership Institute and Pharmacy Leadership Academy, and as the Michigan representative for the Great Lakes Young Leaders in Pharmacy Conference. He also has been elected as vice chair and chairman of the Trinity Health Pharmacy Council.

Shaun’s civic activities include frequent presentations on medication and medication safety topics for the Nottawaseppi Huron Band of Potawatomi Indians and Burnham Brook Seniors Center of Battle Creek. He is a board member and elected board secretary for the Regional Medical Laboratory of Battle Creek.

Shaun’s resume includes a long list of peer-reviewed papers, published abstracts and presentations. He also has earned an MBA from Michigan State University’s Eli Broad Graduate School of Management and is in the process of qualifying for his private pilot license.