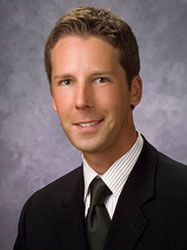 Jason Mitchell graduated from Ferris State University in 1997 with his Accounting degree. Jason’s career as a CPA and audit professional began at BDO Seidman of Grand Rapids, Mich., where he worked for nearly 14 years. For the past three years, Jason has served the Grand Rapids firm of Hungerford, Aldrin, Nichols & Carter, where he was recently promoted to Senior Manager of Governmental Services. Involved with several civic and community groups, Jason’s accomplishments especially shine with his considerable engagement and leadership in the FSU Alumni Association.

Since graduation, Jason has volunteered to assist with Alumni Association programs, first as a guest speaker on campus and later as chair of the association’s Distinguished Alumni Awards Committee — a post he has held for 10 years. In 2004, Jason was elected by his fellow alumni to serve on the association’s board of directors, where he now holds the office of board treasurer.