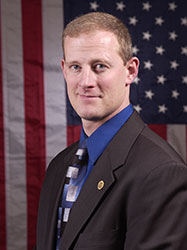 At the 2005 Super Bowl XL game in Detroit, Department of Homeland Security protective security advisor Mike Moll was tasked to write the aviation threat assessment for the event. As a result, the increased Temporary Flight Restriction surrounding that high-profile game became the standard for all future Super Bowls.

Moll has a combined 20 years of law enforcement and security experience including risk analysis, security surveys, and emergency action plans. In addition to his work at Super Bowl XL, he was the main point of contact for the DHS during the Gerald R. Ford presidential funeral in Grand Rapids. Additionally, Moll is a member of several state and regional security committees and was recently elected to Ferris’ Criminal Justice Alumni Advisory Board. In 2005 he helped represent Ferris in the FSU vs. Detroit Red Wing Alumni Hockey Game.

Moll lives in Grandville with his wife, Dianne, and three children.