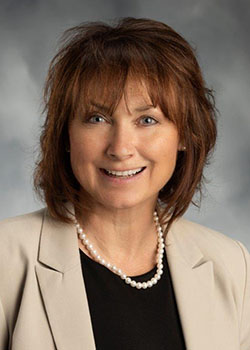 Kathy Pawlicki received her Bachelor of Science in Pharmacy in 1985 and is the vice president and chief pharmacist with Beaumont Health in Southfield, Mich. In this role, she is responsible for the pharmaceutical services in eight hospitals and over 168 outpatient sites. She leads the strategic planning initiatives for 11 retail and specialty pharmacies, maintains regulatory adherence, facilitates the quality standards of medication management and coordinates the integration of pharmacy services throughout all of Beaumont Health.

Throughout her career, she has championed improved medication management by advancing pharmacists and technician roles at small, medium and large hospitals. She values continual advocacy for regulatory issues surrounding pharmacy practice through leadership in professional associations and as a member of the Michigan Board of Pharmacy. She has served as a role model for future pharmacy leaders through her numerous leadership roles in both state and national pharmacy associations as well as her endless commitment to advancing and advocating for the profession. Currently she is president of the American Society of Health-System Pharmacists and was appointed by Gov. Snyder to the Michigan Board of Pharmacy.

Because of Pawlicki’s endless commitment to the profession, she has been presented with numerous awards and recognitions for her work, including the Fellow of American Society of Health-System Pharmacists distinction in 2001, Pharmacist of the Year Award from the Michigan Society of Health-Systems Pharmacists in 2004, the MSHP Joseph A. Oddis Leadership Award in 2011, and the Distinguished Service Award from the ASHP Pharmacy Practice Managers Section in 2012. In 2018, she was named Michigan Pharmacist of the Year.

At Ferris, she has served as an adjunct instructor of clinical pharmacy and provided the keynote address for the College of Pharmacy’s White Coat Ceremony in 2012 and the Hooding Ceremony in 2019. Over the years, she has mentored students, residents and practitioners and provided a shining example of what it truly means to be a Michigan pharmacist.