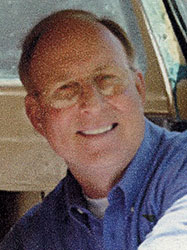 Raymond Baker graduated from Ferris State University in 1962 with a degree in Automotive Service Technology and then acquired his journeyman's tool and die making card from General Motors, both of which helped him establish his business in 1968, Baker Engineered Racing Engines, Inc. During the 1970s and 80s, Baker was recognized as one of the foremost racing engine producers in the United States. Baker has built engines for such noted drivers as Mark Martin, Dale Earnhardt Sr., Neil Bonnett, Bob Senneker, Darrell Waltrip, Johnny Benson Sr., Mike Eddy and many others.

His accolades include being named Manufacturer of the Year by the American Speed Association in 1978; Personality of the Year by the Michigan Auto Racing Fan Club; and induction into the Michigan Racing Hall of Fame in 2001 and Berlin Raceway Hall of Fame in 2008. Baker’s work on racing engines is currently being shown on exhibit at the Gilmore Classic Car Museum in Hickory Corners, Mich.

He is enjoying retirement and consulting on occasion. He's usually found in his workshop restoring classic cars and designing hot rods. In his spare time, Baker is the crew chief for is son Joel's short track late model stock car.