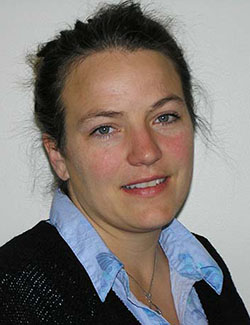 A 1993 graduate of Ferris State University’s Surveying Engineering program has taken a leadership role with the Federal Bureau of Land Management, as Dominica Van Koten has become chief cadastral surveyor, serving at the BLM headquarters in Washington D.C.

Van Koten, a native of Fremont, Michigan, secured her first opportunity in 1991 with the Bureau as a Ferris student, working summers at their office in Anchorage, Alaska.

“I began as a co-op member of a cadastral survey field crew, serving on assignments throughout the state of Alaska,” Van Koten said. “It was fun work and a great experience.”

Van Koten returned to the Alaska State Office following her graduation from Ferris, which began a 15-year advance through surveying and supervisory positions. She directed efforts related to transfer of federal land to native individuals and their villages, corporations and the state of Alaska, while also offering oversight of surveying specialists for that area’s navigable waters.

“I recognized and enjoyed the opportunity to join the legacy of the country’s original surveyors whose work defined public lands across several generations of expansion,” Van Koten said. “I enjoyed each facet of my field experience, with no intentional goal to pursue my current role, which is the highest land surveyor position in the Bureau.”

Before becoming the Bureau’s chief cadastral surveyor, Van Koten spent a decade in the Eastern States Office as the manager of the cadastral survey program for 31 states, from the eastern seaboard to states that border the Mississippi River.

“I have found success by taking things as they come, as we consult with professionals at the federal, state, county and private organizational levels,” Van Koten said.

Dominica became the chief cadastral surveyor for the BLM on April 29, 2019. She said that as her responsibilities grew in the Bureau, it limited her ability to support Ferris’ Surveying Engineering program, but she is proud of each opportunity to provide counsel and encouragement.

“I have served as an advisory board member when circumstances allowed for it,” Van Koten said. “What I learned at Ferris made many things possible, and I am glad to share those experiences and give back to the program, and the University.”