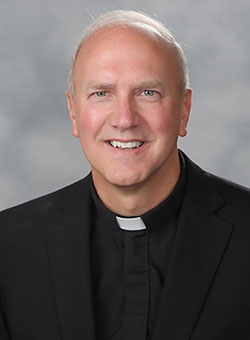 Gerald Vincke, who was recently installed as bishop of the Salina, Kansas diocese of the Catholic Church, said even during his earliest pursuits as a student at Ferris State University there was a foretaste of what would become his life’s calling.

“I spent a half-year as editor of The Torch, Ferris’ student newspaper, as part of my time on the staff,” Vincke said. “An important moment for me came when I was interviewing Father Joe Fix, who was then serving at Saint Paul Campus Parish. In the interview, I asked him a question, which he did not answer. He looked at me and said, ‘Did you ever think about becoming a priest?’ That was the second time I had been asked that. The first occurrence was at my home parish, Saint Michael’s-Maple Grove in New Lothrop, when I was walking out of Mass with my girlfriend at the time and the priest asked me the same thing.”

Vincke earned an Associate of Applied Science in Journalism and continued for a Bachelor of Science in Public Relations, with a focus on Advertising from Ferris’ College of Business in 1987.

“My intention, heading into Ferris, was to study Computer Information Systems, but I also wanted to have a career in sports,” Vincke said. “While I pursued my bachelor degree, I worked for the Sports Information office doing statistics at baseball games and decided to follow the path of my good friend, Brian Bartow, who had done an internship with the Saint Louis Cardinals.”

Vincke headed onto the Plains for the summer of 1986, with great intentions, but was also open to the recurring consideration of an entirely different opportunity and personal direction.

“It was very telling, as I drove into Illinois in my subcompact car, a Ford Fiesta with no radio,” Vincke said. “During that long drive, I spent a great deal of time reflecting on whether God was calling me to the priesthood.”

Part of the support Vincke received while serving the Cardinals was an economical living arrangement with an area family.

“The Millburgs’ children had grown up and moved on, so they were happy to support their team by taking in a Cardinals’ intern,” Vincke said. “I was very close to them, and when I got in touch with Mrs. Millburg, to thank her after my stay there, I said to her, ‘You are the first person I’ve told this to, but I think God might be calling me to be a priest.’ She laughed and said, ‘I knew it.'"

Before his ultimate decision, Vincke completed his studies at Ferris, took on a job at a sports marketing firm based in Ann Arbor, and as a young professional spent some of his free time dating while pondering his future.

“The idea of becoming a priest never really left me, though I enjoyed my life and the work I was doing,” Vincke said. “Finally, I decided to pray about my future, saying, ‘God, I think you want me to be a priest, but can I have one more girlfriend, just to be sure?’”

Vincke began his religious studies, in 1993, completing his Philosophy degree at St. Thomas More College in Crestview, Kentucky, and Theology studies at Athenaeum Seminary in Cincinnati, Ohio and Sacred Heart Seminary in Detroit. He was ordained a priest on June 12, 1999, in Lansing, and the majority of his service has been in the Diocese of Lansing. Vincke also had an assignment as spiritual director of the Pontifical North American College in Rome, Italy from 2010 to 2015. He was serving as pastor of Holy Family Parish in Grand Blanc, when he was named the next bishop of Salina.

“One never really thinks that they are going to become a bishop,” Vincke said. “That call, coming from Archbishop Christophe Pierre, the papal nuncio, changed my life in a moment.”

Vincke said there is much to do and reflect upon.

“I will be attending what some priests call ‘Baby Bishop’ schools, to learn about governance and the elements of diocesan oversight,” Vincke said. “The Diocese of Salina is more than four times the geographic size of the Diocese of Lansing, so I am looking forward to getting around to parishes, learning about their area, while being ready to listen to and love them.”

Vincke acknowledged his story and experiences are quite possibly unique in the annals of Ferris alumni.

“I enjoyed the four years at Ferris, as I met a lot of great people and had many great times there,” Vincke said. “I have certainly been very, very happy throughout many experiences and assignments as a priest, and now look forward to being with and serving the parishes of the diocese as bishop of Salina.”