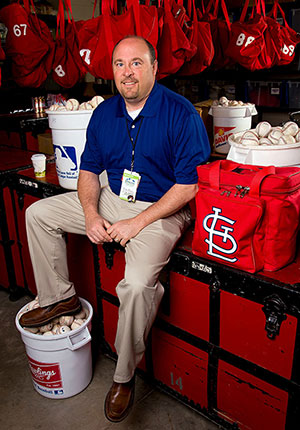 “It was first awarded in 1981, and it’s voted on by past winners,” Bartow said. “The award is almost like a mini-Stanley Cup, engraved with the names of the winners. It’s very nice, and humbling.”

Bartow, a Battle Creek, Mich. native, received his Bachelor of Science in Public Relations from Ferris State University in 1985. He also earned an Associate degree in Mechanical Design from Ferris in 1982.

During his time in Big Rapids, Bartow was a student assistant in Ferris’ Sports Information office for two years, and served as statistician and public address announcer for Bulldog baseball while completing his bachelor’s degree.

“I called on Ted Halm (then Ferris’ Sports Information Director), basically stood in his door and said, ‘I want to do what you do,’” Bartow said. “He was a big help in getting my career started.”

“It’s been a great life, and when you last that long in something, you make so many good friends, people you spend more time with than you might with your own family,” Bartow said.

The Robert O. Fishel Award is given annually by MLB, and is named after the inaugural winner, who worked for the Cleveland Indians, St. Louis Browns, New York Yankees and the American League. The award goes to the “active, non-uniformed representative of Major League Baseball whose ethics, character, dedication, service, professionalism and humanitarianism best represent the standards propounded by Robert O. Fishel.”