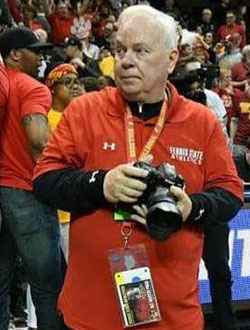 An alumnus of Ferris State University’s Marketing program has been named the first “Friend of the Torch,” as the staff of the award-winning student newspaper created the honor to express its thanks for photographer Kevin McDermott’s contributions to its publication and coverage abilities.

“When I was a freshman, my sports editor at the Torch had me write a story on this guy who followed Ferris sports religiously and took photos for the university pro bono,” said recent graduate and former editor-in-chief Keith Salowich. “After the story, I ran into Kevin regularly while I was learning to shoot photos at Ferris football and hockey games. He took me under his wing when I had no business holding a camera on the sidelines. He taught me where to stand, how to anticipate the action, how to best adjust the settings of my camera for the lighting conditions. He made a tremendous impact on my photography and I know that other Torch photographers would say the same.”

McDermott has been practicing photography for more than 30 years, but only recently brought his talents back to Big Rapids to regularly shoot Ferris sporting events. He set a new personal mark in the 2017-18 academic year by photographing 75 of the university’s sporting events, including the men’s basketball team’s 2018 NCAA Division II National Championship in Sioux Falls, South Dakota. During those many travels around the country while shooting the Bulldogs, McDermott has regularly reached out to Torch staff members to offer professional-grade photos for publication, when Torch photographers were unable to make the trip. He has also served as a supportive mentor for several Torch photographers by offering valuable photography advice on the sidelines. McDermott’s contributions have supplemented Torch sports coverage at times and imparted lasting lessons for staff members at others.

The university’s Athletics Department also benefits from McDermott’s efforts to collect photos at its contests and recently named him as a recipient of the "Pete Peterson Bulldog Pride Award."

“Aside from the fact that he’s an outstanding photographer and has captured so many of the most iconic moments in our school’s history, he really does it for the right reasons,” said former Torch editor-in-chief and current Ferris Athletics Communications Associate Harrison Watt. ”He’s been published so extensively, because he works his tail off to get better at his craft. He treats a photo in the Torch like a photo in the New York Times. Kevin’s just happy to be helping someone.”

McDermott is a Philadelphia, Pennsylvania area native, who graduated from Ferris in 1979 with his Bachelor of Science degree in Marketing.