Andrew MacIver already knew a little something about turning challenge into opportunity when he graduated from Ferris State University’s College of Engineering Technology in 2013. 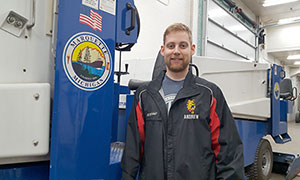 The Bachelor of Science in Facilities Management alumnus had entered Ferris from high school with plans to play Junior A hockey and try to walk on to the Ferris’ Division I Men’s Ice Hockey team.

"I’m as comfortable in skates as I am walking,” said MacIver, who has been on the ice since the tender age of two. Growing up, the Big Rapids native was big for his age and a points leader on his hockey teams. His father had played high school and Ferris Club hockey, and his grandfather had been a professional hockey player. Andrew had grown up watching the Bulldogs play.

"The D1 success of the Ferris hockey team really inspired me and my teammates in high school,” MacIver said.

But that inspiration turned to disappointment when it became apparent that past injuries would keep him from playing successfully on the Bulldog Hockey team. It was a hard realization.

Moreover, his background in hockey had made him goal-oriented and focused — traits that would serve both him and the city of Marquette, Michigan, very well as he graduated Ferris and began his career as Marquette’s Parks and Recreation Coordinator, with management responsibilities for the community’s Lakeview Arena and its park system.

In many ways, MacIver’s own history mirrored that of the facility for which he assumed responsibility. Lakeview Arena was experiencing its own set of challenges.

Though Marquette had been a major Upper Peninsula hockey hub and has a proud hockey tradition, it was suffering in the economic recession, as state funding for public resources affected municipal services, especially subsidies. Hockey programming started to decline along with the number of local families who could afford to participate.

But the arena was in rough shape: The roof leaked. There were frequent problems with its mechanical systems and too few staff members to keep it clean. It was the perfect problem for MacIver to apply the skills he’d learned at Ferris.

"The knowledge of ice arena management that I gained at Ferris really helped. I took classes for everything you need to know for arena management, from [heating, ventilation, air conditioning and refrigeration] to park management,” he said. "But I knew going in, the hours, and that it wasn’t going to be glamorous.”

A 2015 bid to revive hockey in Marquette by nominating it for the Kraft Hockeyville USA competition had fallen through when the city wasn’t selected. Sponsored by Kraft Heinz, the National Hockey League and the NHL Players’ Association, the contest offers the winning community the chance to host a pre-season NHL game and funds for major arena improvements. A win would provide the kind of boost that could make a big difference to the community.

"Hockey has social value,” said MacIver. "There was a sense of tension and loss in the community — that hockey was slipping away. In the U.P., pride is strongly tied to hockey.

"Hockey also has economic value. Visiting hockey teams, and their families and coaches, spend longer periods of time where they play than in other types of sports — they stay, eat and shop in town, so it’s an economic driver.”

Determined that Marquette would fare differently in the 2016 competition, MacIver again set out to rally support for the city during the nomination phase. Using social media and strategic marketing, he found initial support, but, overall, spirits seemed lower than they had been for the previous contest.

Despite low hopes, Marquette was selected as a 2016 contestant. Lakeview Arena was awarded $10,000 for upgrades, and the community looked for ways to boost their support in online public voting in the final round, where a grand-prize win would increase the award to $150,000 and bring home a nationally-televised game. Fortunately, MacIver knew a group of hockey fans who could help him drive online voting: fellow Bulldogs.

When MacIver and Ferris’ News Services and Social Media Manager Sandy Gholston shared the story of Marquette’s Hockeyville USA bid online and via university social media in April 2016, Ferris State alumni and friends came out in force to vote. Their support helped bring the national spotlight to Marquette and the grand prize to Lakeview Arena.

"The support we received was humbling and overwhelming,” said MacIver. "And it served as the spark to revive hockey in Marquette.”

The victory secured, MacIver organized a committee to begin efforts to make the arena ready for prime time, including kickoff and additional fundraising activities. Volunteers worked around the clock, painting and cleaning. On Oct. 4, 2016, the arena hosted the Buffalo Sabres and Carolina Hurricanes. The event brought new attention to the arena, which was subsequently selected to host a state hockey championship tournament in March 2017.

"The local organizing committee was absolutely critical to the success of the event,” said MacIver. "These people are just passionate about the game and their hometown. They devoted countless hours on top of their already busy lives.”

MacIver’s new challenge is to keep the momentum going. He is applying what he learned at Ferris to sustainability projects for the arena, such as energy and operation cost management, as well as working with others on continued fundraising through events including a gala and a 5K race. Whenever possible, he also makes time to get out on the ice, often to help others in the community explore hockey and skating.

"It clears your mind and keeps you in the moment,” said MacIver. "If you love the game, you have to find a way to be around it. You have to follow your passion."