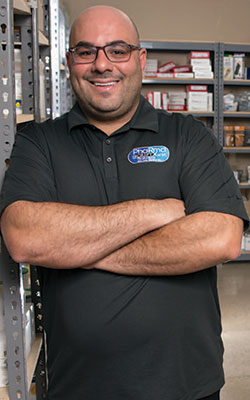 On his desk, you'll find a pile of cash available for any employee who may need it, and a stack of thank you notes and cards from patients. One reads, "With all the difficult problems with my doctors and my insurance, you have been there for me. Thank you for your time, care, wisdom and being heaven sent. You are the best ever!"

In a field that has become much less personalized over the course of time, Adel Makki knows his many patients by name, if not the little details of their lives. He is anything but a typical business owner, manager and human being. He chooses to live a generous life, showing compassion for those he encounters and offering his time, money and talents, while remaining a successful businessman who is involved in multiple ventures at a time.

"The way I live is oil and water, but it's mixing together. Good things happen to good people. I believe in that," Makki said. "Why do all the religions preach charity? It's because it's founded on the basis that God is going to give back to you if you give. It's in every religion. But even sometimes, the fulfillment is enough."

The 39-year-old businessman recently established a $1.2 million endowment at Ferris State, designed to provide scholarships to Pharmacy students for the next seven years. This followed another considerable gift to Ferris State in 2015.

While Makki graduated from the University of Michigan-Dearborn with a bachelor's degree in business, he pursued his desire to take his education one step further, following family influence and the aspiration to do something entrepreneurial. At the age of 25, he began his doctorate in Pharmacy at Ferris State, always knowing that, while he didn't want to be a pharmacist, he wanted to be in the business of pharmacy.

"When I was in pharmacy school, I never thought that I was going to be a pharmacist. I think the most important thing is that you always have to expect the unexpected; go with the flow," Makki said. "I think if you work hard, honestly just work hard, and do what you got to do, everything else falls into place and the universe works with you."

And though many people don't practice the advice they give, Makki is not one of them. While he takes much pride in his long-term care pharmaceutical company, Pharmascript, located in Farmington Hills, Michigan, it is far from the last checkmark on his list. He is also involved in real estate and has franchising rights to Detroit-located coffeehouse the Roasting Plant.

Makki did not achieve his success by reading books or following set guidelines. Instead, he accomplished it by maintaining an unwavering commitment to hard work, studying people who have done great things historically and staying true to his upbringing.

Born in Lebanon, Makki came to the United States with his parents at just 11 days old. Raised in Dearborn, Michigan, by immigrants, Makki experienced the importance of giving from an early age, thanks to the Dearborn Goodfellows, a group dedicated to providing assistance to Dearborn children in need.

"My parents were immigrants; they didn't have money or anything, so they would sign us up for the Goodfellows, who would bring a box on Christmas of toys for us," Makki said. "So ever since I was a kid, I would say that, when I grow up, I want to give back. Every time I see the Goodfellows, I'll write them a check because I feel like they gave me something and I want to be able to give it even more. And that is the same way I feel with the Pharmacy program — they gave me something."

Inspired by the Goodfellows' kind gesture at Christmastime, Makki has continued to remember the impact the simple act made on him as a child and pay it forward. Moreover, during his time at Ferris, he was given a reminder about what giving can do for other people.

As a Pharmacy student, Makki was a recipient of a scholarship which, in his words, "made it possible" for him to continue his education. Now, roughly 11 years after graduating from Ferris (in 2005), what is his goal? Simply "to create a chain — a legacy of people paying it forward."

"I want to be that person to help somebody else, because it made a difference to me," Makki said. "I want to make a difference for more than one person. It's in line with that whole paying it forward thing, and I would hope that it encourages the recipients of my scholarships to pay it forward."

But he isn't just talking about monetary resources. To Makki, giving back does not have limitations. In junior high, he stumbled upon a quote on a poster hanging near his science class and, today, can recite it on queue: "What a man does for himself dies with him. What he does for his community lives on forever."

"I'm not big on recognition. That's not what's important to me. Making a difference is not always monetary. It's been time, it's been advice, part of giving back is giving back to your employees and helping them out," said Makki. "If everybody just gave a little back, that's a lot. Even if you think what you are giving is not enough, if everyone has this consensus of 'we're going to give back,' it becomes a lot. Everyone together."

"I can keep giving and have established a gift that can keep giving, even when I'm not around anymore for other generations, and I think that's really important," said Makki. "I feel that it's an obligation to give back. Especially to Ferris State, for me at least personally, because I am here because of that. I feel like I am not doing it out of the kindness of my heart, really, I'm obligated to do this."

He continued, "Success is not always measured by how much money you have or how much money you make. There is another level, like, what do you leave behind? What's your legacy? If you can imagine in your mind that it's going to happen, then you can make it happen."