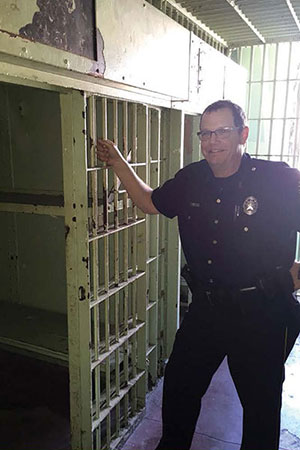 Editor's note: Roderick "Rick" Janich (EHS ’81) graduated from Ferris State on June 1, 1981 and a week later, the Saline, Mich., native started training with the Dallas Police Academy. He has spent his career with the Dallas Police, one of the largest and most-recognized departments in the United States. A self-proclaimed police-history buff, the senior corporal now serves as the official historian and curator of the new Dallas Police Department Museum. The facility showcases the Dallas PD's rich past, from its frontier outpost days to today's sophisticated technology, including its investigation into one of the most infamous days in U.S. history: the assassination of President John F. Kennedy on the streets of Dallas on Nov. 22, 1963. Here is Rick Janich's first-hand account of his career with the Dallas Police Department.

I have been with the Dallas Police Department since the week after I graduated from Ferris State.

I wanted to work for a department with opportunities not only as a patrol officer. While discussing career options with Ferris’ Criminal Justice staff, I discovered the Dallas PD offered the probability for advancement and it was actively hiring. All arrows pointed me to Texas.

I started at the Dallas Police Academy one week after graduation. From the first day, the training and education I received at Ferris State was immediately put to use. I found that the physical training CJ professor Terry Nerbonne provided to his students prepared me for the rigorous physical fitness challenges of the Dallas Police Academy. Ferris’ curriculum of report writing, firearms training and other skills helped me greatly during my 17 weeks in the academy.

During my first patrol assignment following graduation from the academy, all of my Ferris education and Dallas PD training paid off, so much so that I was released early from the Field Training Officer program.

As soon as I was able to, I applied and was accepted as a Field Training Officer and took on the task of instructing young recruits. After several years in the FTO program, I was selected to join the Dallas Police Recruiting unit.

The Dallas PD was recruiting nationwide, and I was assigned to the Midwest sector of the United States. One of the states I covered was Michigan, so several times a year my recruiting team and I would come to Michigan and, of course, Ferris State was on my list of stops to look for potential police applicants.

After a great career in recruiting, crime scene investigation and patrol, I was selected to help plan the new police headquarters building that eventually would include a museum. The Dallas PD left the historic Dallas Municipal Building in 2003 and opened the Jack Evans Police Headquarters.

In 2011, the museum’s first phase — the Air and Ground Vehicle Display — opened in the headquarters’ two-story lobby. It includes a 1971 Harley Davidson Service Car, a 1928 Ford, a 1994 Kawasaki motorcycle and a fully displayed Bell OH-58 helicopter.

I recently took on the full-time position of museum historian and curator with the vision to add more of our world-class collection of artifacts to the Dallas Police Museum. Fundraising has been our greatest challenge, but we are seeking donors and raising funds through donations by Dallas PD employees. The project’s total estimated cost is $2 million.

Since joining the Dallas PD, I have been immersed in its rich history. My particular interest, like so many others, is on the events surrounding Nov. 22, 1963.

The assassination of President John F. Kennedy in Dealey Plaza that November day changed the world, and the Dallas Police Department was thrust into the spotlight.

JFK's assassination by Lee Harvey Oswald is one of the most infamous crimes in United States history. The work done by the Dallas PD on Nov. 22 and the days following often gets overlooked. The department had in custody the suspected murderer of a Dallas Police officer who was later identified as Kennedy’s killer.

It has been an honor to meet some of the officers and civilians directly involved in those events. I’m proud to call Marie Tippit, the widow of officer J.D. Tippit, a longtime friend. Tippit was gunned down 45 minutes after JFK was assassinated. He had stopped Oswald, who was on foot, in a nearby neighborhood. Oswald was found a short time later hiding in a theater a few blocks away and arrested.

My friendship with Mrs. Tippit began a few years ago when I accompanied her to Washington, D.C. for National Police Week and her first visit to see the National Law Enforcement Officers Memorial. Mrs. Tippit is a gracious and wonderful person, and is a friend of the Dallas Police Department. She allowed the police museum access to the revolver and badge her husband was carrying when he was killed to be used in a poster for a fundraiser for the museum.

During planning for the 50th anniversary remembrance of JFK’s assassination in 2013, I proposed we pay tribute to Tippit with a commemorative badge. I designed the badge, identical to the current one worn by Dallas Police officers, with a black honor bar across the center engraved with the inscription “J.D. Tippit #848, End of Watch 11-22-63.”

The Tippit badge led to an additional opportunity to honor the 79 other fallen officers killed in the line of duty since the department was established in 1881. The badge can be customized to include the name of any Dallas Police officer killed and is authorized to be worn during National Police Week each May. The Tippit badge can be worn each Nov. 22. A portion of the badge sales benefits the local Assist the Officer Fund and the Dallas Police Museum.

As part of my current role as historian and museum coordinator, I arrange and give tours to high school and college students, fellow officers and dignitaries of behind-the-scenes locations connected to the assassination investigation. The museum’s focus on the Kennedy assassination will include the extensive planning for the visit and the massive response and investigation to solve the crime of the century.

I am planning and fundraising for the museum's next phase, a high-tech, state-of-the-art theater where footage will be shown of the department’s history and work, Dallas’ most notorious criminals and most celebrated heroes. We hope to have it complete by the end of 2015.

I have a vast love of police history and have amassed a huge collection of memorabilia over the years. I am a history geek so museums excite me, but the sweat equity in this project is my driving force. My work to make the museum a reality will allow me to leave a footprint on the Dallas Police Department’s history for ages.

Photo caption: Ferris State University alumnus Rick Janich, a senior corporal with the Dallas Police Department, stands by the cell that held Lee Harvey Oswald, who was in custody after being charged with the assassination of President John F. Kennedy on Nov. 22, 1963.