Brian Baltosiewich - What? Did I Stutter? Ferris Helped Me Find My Real Voice

Brian Baltosiewich's (B '89) experience as a student-athlete majoring in Journalism and Television Production at Ferris helped him find his voice. Despite a pronounced stutter, Brian faced any adversity it presented head-on. His journey has resulted in a successful broadcast career and even a few comedy gigs.

Something completely unexpected happened when I came to Ferris State. I grew up in Riverview, Mich., a 20-minute drive down Interstate 75 from Detroit. It was a perfectly normal place to be, and I had a perfectly normal upbringing with incredibly supportive parents. I didn’t lack for anything. It was the spring of 1984. I was a 6’8,” 270-pound offensive tackle from a football high school, and I was looking for a place to play. I got some attention from the big schools, but I wasn’t sure about the fit. Ferris called. I scheduled a visit. You know when you visit a place, meet the people and see the environment, and you just know? I knew I’d be going to Ferris. There was one thing, though, that had the potential to make things difficult. I stuttered. Badly. When it’s bad, it’s really bad — a literal, physical block between my brain and my tongue. No one really knows what causes it or how to treat it. There is no “cure.” It’s a nightmare to grow up with. Imagine what it’s like to read in front of the class, talk on the phone or ask a girl to a movie when you can’t put more than a couple of words together. Growing up, a small percentage of my classmates were unkind, but a much larger portion was accepting.

Now, I was leaving the safety and familiarity of home for a college campus where nobody knew me. But I was ready — to major in Journalism and Television Production, and to play football. So I showed up, and that’s when the unexpected happened. No one at Ferris cared that I stuttered. Not my teammates, not my coaches, not my friends or instructors. What they cared about was me. It just didn’t matter. Before, my stutter seemed like it was a central part of everything I did, whether it was reading in class or talking with friends. At Ferris, no one knew me as “that tall guy who stutters.” It was a clean slate, a fresh start. So the thing I feared the most mattered much less at Ferris than I ever thought it would. How empowering is that? I earned a starting position on the Bulldog football team as a freshman, became entertainment editor of The Torch student newspaper, made friends that have lasted a lifetime and absorbed all I could in the classroom, honing my writing skills until it came time to move into television. 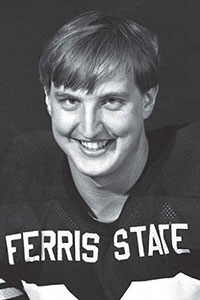 I loved playing football at Ferris. I learned a lot about myself and about the game — I could have done without the knee injuries and the five surgeries since then, but stuff happens. By the time I earned an associate degree in Journalism and started what then was called TVP (Television and Video Production) in my junior year, my football career was over and I threw myself completely into television. I knew then, as I moved through the classes and worked in the studio, that this really was what I wanted to do. Long hours working on projects felt like minutes, and I came to recognize that as an indication I was doing the right thing. My career began immediately after I graduated in 1989, when I landed a job as a master control operator at WWTV in Cadillac, Mich. About two years later, I moved downstate to WLNS in Lansing to work as a news producer. This was where I decided to really put my stutter behind me. I had confidence in my professional ability, thanks to what I learned at Ferris, and had learned to coexist with stuttering — now I needed to show who was really in charge. I was always interested in standup and comedy. I just thought it was a really powerful form of expression but never really entertained the thought of doing it myself until after I left Ferris. I was going to stand in front of a couple hundred people at Connxtions Comedy Club in Lansing and perform material I had written. It was either going to go really well or I would forever be a slave to my stutter. My set opened with a couple lines about my stutter, getting it out in the open and giving the audience permission to laugh with me. Getting that laugh — finding the humor in something that had the potential to hold me back — was thrilling. I came off the stage six minutes later a different person.

My time on stage went so well, I was hired to perform a few times for actual money, opening for touring comedians and months later even placed second in a regional standup competition. From that moment on, stuttering wouldn’t prevent me from chasing down the things I wanted to do. I have worked on both sides of the camera as a producer/director and occasionally as a host. I provided color commentary and play-by-play for collegiate hockey games on the ESPN radio affiliate in Tucson, Ariz., for more than a decade. I wrote and directed two shows with entertainer Alice Cooper and won a national award for writing on that project. I have been producing and hosting streaming audio and podcast programming since 2000, and I have produced, written for and worked with some of the biggest names in broadcasting — and if it sounds like I’m bragging — I am. I’ve earned it. Best of all, my wife, Terra, says she doesn’t notice my stutter. It’s still there. But it no longer matters. And the long road to that point, in no small way, started in Big Rapids.

Today, Brian is a senior marketing producer at WBTV in Charlotte, N.C., and produces daily podcasts as a hobby. In March, he appeared at Charlotte’s Comedy Zone, performing standup for the first time in 20 years. Follow him on Twitter @NCBalto72.