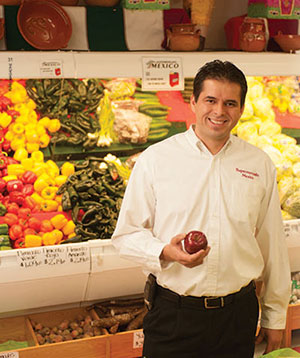 Walk into one of Javier Olvera’s three Grand Rapids-area grocery stores, and, instead of being greeted by the usual Muzak or Top 40 playlist, you’re likely to hear accordion-driven conjunto or some mariachi. Combine that with an interior design that features colors of the sun-drenched countries to the south and Mission-style arches, and you might guess that many of the store’s regular customers are members of the local Hispanic community.

Olvera opened his first store in 2006 along with his wife, Kerry, his brother, Pablo, and his sister-in-law, Maricela. He points out some of the elements of his newest Supermercado Mexico store, on Division and 34th Street in Wyoming, that cater to his customer base — a large selection of spices, a meat department with cuts suited to Mexican cuisine, as well as convenience services such as wire transfers. Olvera knows the importance of staying connected to one’s roots. When he was 5, his family moved from his native California to Guadalajara, Mexico, where he lived until he moved back north when he was 16.

“I’m attached to Mexican culture, so I want to bring it here to the United States,” he explains. “When you’re here, you miss the food and the culture of Mexico, so that’s why we decided to make it cultural inside our stores.” His commitment to serving the Latino community earned Supermercado Mexico the West Michigan Hispanic Chamber of Commerce’s 2012 “Most Promising Business” award, as well as a nomination for the Michigan Top 50 Companies to Watch in 2013.

Olvera did not start out to be a grocer or a small business owner. Long before he sold fruit in his stores, he worked in the fields, picking tomatoes, blueberries and apples. After graduating from Union High School in 1993, he began attending Ferris, taking all but one of his courses at the Applied Technology Center in Grand Rapids. He worked full time to put himself through college, earning his Engineering degree in 2003. He was working at Steelcase as a project designer when the opportunity to buy his first store, La Tapatia Supermarket on Clyde Park Avenue, presented itself.

“My sister-in-law was a manager there, and she told me about it. The owner was willing to sell it, so we decided to go for it. When I analyzed the numbers, it looked fine to me. I was still working at Steelcase, and I was part time in my business,” Olvera explains. Since then, his business has expanded to include Supermercado Mexico on Chicago drive, which was an existing business, and the new store on Division Street.

“I loved being an engineer and working at Steelcase, but I also have an entrepreneur’s mind. In Mexico, my dad owned an assortment of small businesses, so I had some firsthand experience working with customers.” He now devotes himself to his business full time.

Olvera notes that the Hispanic community in Grand Rapids has grown about 30 percent in the last decade. Too often, fast-growing minority communities in urban areas are underserved in such basic needs as places to buy healthy food. A city with this problem is said to have a “food desert,” where the only places to shop for fresh produce are in the suburbs, often inaccessible by public transportation. The convenience stores left to serve the inner city often carry only nutritionally deficient processed food products, high in sugar and fat calories. In contrast, even the smallest of Olvera’s three stores, La Tapatia, sells fresh meat and produce, including fruits and vegetables not always available in the average supermarket: tomatillos, poblano peppers, cactus and chayote.

Although at first it might not seem that Olvera’s engineering background would translate into the skills set needed to start a grocery store chain, he says that much of his Ferris education helped prepare him for the challenges of being a small-business owner.

“All the math classes helped me tremendously. Also, computers and programming,” he says. “I think, even more, it was how Ferris taught me to think differently than I used to. It helped me to be persistent and finish projects. At Ferris, our teachers told us you have to form a group to accomplish projects. That’s what I’m doing right now.”

Olvera makes it clear that he wants to be a part of a team larger than just his own business group, and larger even than the local Latino community. With some long-empty buildings in downtown Grand Rapids undergoing renovation, Olvera sees his plans to expand and upgrade his stores as part of a broader economic resurgence in Michigan’s second-largest city.

“There are a lot of investors putting their money in downtown Grand Rapids,” notes Olvera. “We want people to feel free to come to our grocery stores, to be comfortable, to know that we are also investing in the city. As we keep growing and investing in the community, we hope community members will invest in us, as well. We have received help from other businesses, and we want to transfer that to our community. We need to stay together and help each other.”

At his Chicago Drive location, Olvera points out where the building was remodeled to create more retail space, and the bank of new coolers he and his brothers installed. (“When you start a business you have to do everything!”). He has expanded floor space at his existing locations, but wants to expand them further and also open new stores. In addition to the grocery side of the business, this Supermercado Mexico also features a taqueria, which offers burritos, quesadillas, tamales, gorditas and more.

When you go to Supermercado Mexico, a couple of tips: Be forewarned that the aromas of spiced chicken and pork might cause you to overfill your shopping cart, and while in the restaurant, try the chorizo tacos with a glass of agua de horchata — sweetened rice water flavored with cinnamon. You won’t be disappointed.