You never know where the idea for a better product will come from. For example, Jessica Zarate’s inspiration for a better way to collect crime scene evidence involved a hacksaw and pore cleansing strips.

Several years ago when Zarate (EHS’03) was a police officer in Northville, Mich., she was helping process evidence from a homicide case. The collection of this evidence required the use of a hacksaw to cut apart a large, heavy lamp in order to take it back to the lab for processing. 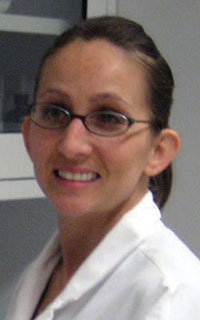 “For non-blood, latent impression evidence, a forensic scientist or police officer at the scene can simply dust the impression with a powder and lift it with a tape. For blood-impression evidence, before I developed this lifting strip, there was no product to do that,” explains Zarate. “So objects with bloody impressions had to be physically removed and brought back to the lab to be processed using chemical enhancement techniques.”

“I was doing research on titanium dioxide, trying to get it as a paste to enhance impressions I was lifting with things like black electrical tape or duct tape. I tried hundreds of different kinds of tape, but was unable to get any of them to really work well,” says Zarate.

“Titanium dioxide has only been used as an enhancement chemical for fingerprint impressions, maybe within the last 10 years. It has shown to be effective for enhancing bloody impressions, as well as non-blood impressions on the sticky side of the tape, and it’s non-toxic,” explains Zarate. “For these reasons, it was a clear choice to utilize in the lifting strip formula which is then bonded to a nylon transfer membrane. I just kind of hit the jackpot when I found out how I could make the two come together. Bloody impressions can now be lifted, enhanced and preserved, including those deposited on difficult substrates such as denim or cotton and aged impressions up to six months old, which cannot even be visualized with the naked eye.”

To bring the Zar-Pro to market, Zarate licenses the product to Arrowhead Forensics and Tri-Tec Forensics, for manufacture and distribution. The product has been validated and adopted into procedural manuals in forensic labs across the country, including the Michigan State Police Forensic Science Division, which collaborated with Zarate on the research project. It is also being sold and used internationally in countries such as Canada, Mexico, The United Kingdom, France, Australia, South Africa, The United Arab Emirates and Korea, to name a few.