Not Your Grandfather’s Welders

On the shop floor, in space, by hand or robot-controlled, Ferris Welding Engineering Technology grads spark the economy

A 2006 Wall Street Journal article, "Where Have All the Welders Gone, As Manufacturing and Repair Boom?" predicted that by 2010 there would be a shortfall of about 200,000 welders nationwide. Now, in 2012, the Gas and Welding Distributors Association notes that "the welder shortage has been well documented within the industry" and that "estimates are that there will be 238,000 new and replacement jobs in welding, welding engineering and related fields by 2019."

According to a study conducted by Ferris' Welding Engineering Technology program, if you are driving a car manufactured in North America, some of that vehicle's welded connections were engineered and processed in some way by a Ferris WET alumnus. "We've got graduates at all the major manufacturers and throughout the supplier chain," says WET professor Ken Kuk. "We're locked in pretty tight to the automotive industry." So, "where have all the welders gone?" Many of them have gone to Ferris.

The Arc of a Profession

The image most people have of welding is probably that of someone bending over a Fourth-of-July-worthy cascade of sparks, "A guy in leathers and the helmet," as professor Bill England describes it. While such an image is not altogether inaccurate, manufacturing efficiencies have created a greater need for workers who can engineer a project rather than simply join two pieces of metal together. Those are the skills with which Ferris' WET students graduate.

"If you're going to attach, say, two pieces of steel — different shapes, different thicknesses, different chemical compositions — where does the weld have to be? How big does it have to be? And what does it have to be made out of?" Kuk asks. "Those are complex questions, because what's the intended purpose? Is it a static load? Is it an impact load? Is it designed for fatigue? Is it going into a corrosive environment? Is it going to be operating at temperature? You don't just weld two pieces together and expect it to work. It has to be designed and engineered."

Which is exactly the point of the WET program. The four-year degree is structured to give students the skills to design and oversee manufacturing processes rather than simply perform individual steps in those processes. And as the need for manufacturing and energy efficiencies increases, those pieces being joined together are increasingly not just metal, but new, composite materials that redefine welding as craft.

"I've got a student right now who's working on some Airbus and Boeing products that are composite solder, really complex," says professor Dave Murray. "Also, Ferris grads have worked on virtually all the U. S. satellites that have been launched in the last two to three years." 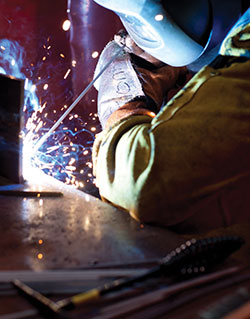 Traditional welding processes remain the bread-and-butter of many of the major corporations who hire Ferris WET graduates — including Caterpillar and John Deere, in addition to automobile manufacturers. However, Ferris produces both associate and bachelor's degree graduates (typically, engineering technicians and engineering technologists, respectively) with the skills-set needed in automation and more esoteric forms of welding.

"I, myself, wasn't one of the kids who had a lot of welding experience when I came to school," professor Jeff Hardesty says. "What really excited me were the robots. It's something that continues to interest and excite me. I like welding because it was that mixture of different technologies. I thought, 'I can play with robots and explore these other areas that interest me.'"

Robotics and automation are very much at the center of advances in welding, as tools to perform precise and efficient welds. Hardesty points out the need for robotics in nanotechnology, for example, as well as in such newer processes as friction-stir welding — a process that doesn't employ heating. There are other processes for materials that are not traditionally "weldable," which do not come immediately to mind for those outside the profession.

"The technology has allowed us to use less heat as we've developed new welding processes in a more controlled manner," says Kuk. "Every time we come up with a new welding process, it generally directs less heat to what we call the substrate, the base material. That's great, because heat is bad, generally, for metals. I think we'll see more and more processes that don't involve heat. We already see lots of adhesives, which people don't equate with welding. These processes will allow us to join complex materials, which will involve much more training, which brings it right back to education."

"My high school metal shop class came through here and toured in the 70s. The second I was enrolled here, from day one, I felt this was the greatest experience of my life," he says. Murray also made a quick transition back to Ferris. After teaching for a couple of years at a community college, the program had to fill two positions due to retirement. He is now in his 32nd year of teaching at Ferris.

Carney's route highlights the close relationship between the WET program and industry. In his junior year in high school, Carney started doing after-school work at Doorman Manufacturing in Royal Oak, Mich., a job which turned into a full-time position after he graduated.

"Then, I-696 came right through our office, and our building was moving north to Auburn Hills. One of my bosses took me aside and said I needed to go to school instead of continuing on with what I was doing," says Carney. He subsequently came to Ferris in 1983 and graduated with his bachelor's degree in 1987. He went back to the Detroit area and worked in the welding supply business, returning to teach at Ferris in 1996. Understanding the needs of industry is important in a field that serves such a huge cross-section of the American economy.

"Of fifty percent of the goods and services that comprise the gross domestic product, the manufacturers of those products consider welding to be a critical, enabling manufacturing process. It has to be there. The chair you sit on, the bike you ride, the car you drive, all

have to be welded. It is not going away," Carney notes.

Kuk, who has a similar background, having come back to Ferris to teach by way of a division of General Motors where training others was an important part of his job, stresses the ubiquity of welding by saying, "Welds tend to be covered up. They're dry-walled over or painted over, and most people don't even know they're there. We're like Microsoft — we're an operating system running in the background."

welding in the current energy boom, and of the many countries in which Ferris WET grads are working.

With Ferris providing about 35 percent of the country's four-year graduates in welding engineering technology and welding engineering each year, it's easy to think that they could turn up just about anywhere — including in that Wall Street Journal article about the

shortage of welders. The lead for that piece featured Ferris alumnus Will Chemin and the fact that he had lined up a position with John Deere before he even graduated. He's still there, working as a welding engineer.