Jacki Easlick: Designing Outside the Box

Jacki Easlick (B’90) found early success in the corporate world. From 1990-96 she was senior creative services designer at Gerber, helping to design packaging and advertising for the baby food maker’s popular Graduates line of products; from 1996-98 she was senior art director for make-up and fragrances from Artistry (a division of Amway), overseeing and designing communications for the $1 billion line; and from 1998-2002 she was design manager for Steelcase Wood and Stow & Davis. 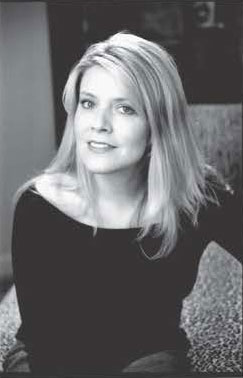 Then in 2002, in the economic fallout from the World Trade Center attack, Steelcase laid off thousands of workers — Easlick among them. At the time she had personal offices in both Grand Rapids and Manhattan, where she was living, and where she was headed when she had her epiphany.

“I remember being in the Gerald R. Ford Airport on my way back to New York,” says Easlick. “There was this Sikh wearing a turban, dressed all in white. He asked me where I was going and what I was doing. I said I was flying to New York, but I’d just lost my job. He told me I needed to figure out my direction or that when I got to Manhattan I would be forever lost.”

“I joke with my husband that if he ever wants to get romantic, he just needs to find those Nickelodeon branding slides,” Easlick says.

She contacted a recruiter who said that he could get her a job but she would have to scale back her level of employment. She would be a designer, not a manager. In a week, she was on a new path, designing for an accessories company that worked with many different licensed brands.

“I worked on the Mary-Kate and Ashley line,” Easlick recalls. “I worked on Nike designer backpacks and totes, stuff that was co- branded with the Yankees. I did all the sports — the Red Wings, the Mets, the Lakers, the Giants, the Jets, you name it. I also worked on Lucky™ and Levis™, so I got really good experience.”

Easlick took that experience and moved back into the role of managing, although also still designing products — including for such well-known “tween” brands as Hello Kitty™, Hillary Duff and Hannah Montana. By then it was 2006. With four years of fashion experience she wanted to work with the kind of industry-leading companies she had in West Michigan. She took a position with Kenneth Cole, which included being in charge of its Reaction™ line, and then with Vera Bradley, where she opened and ran its Manhattan design studio.

Easlick says it was at Vera Bradley that she felt like all her skills and experience really came together. “I was managing a budget. I was managing a team of people. I was traveling to China, Taiwan, Hong Kong and Tokyo. It was a big job.”

She explains, “When I began healing I took those sketches to a factory in Manhattan and said, ‘Look, I’m starting my own line. Can you make prototypes for me?’ And they were like, ‘Who are you?’ As soon as I said I was a former design director for Kenneth Cole and had managed a multi-million dollar business, they were like, ‘When do you need them by?’”

“I’ve been a speaker at the Cooper-Hewitt design event for two years in a row,” says Easlick. “The event is held by Tim Gunn, who is the main speaker. The audience is young adults looking to get into design. I always get one student who asks me, ‘What if you can’t sketch very well, or what if you’re not very good?’ I always tell them I got a D in my first design class at Ferris State University, but that I learned.”

Despite her success, Easlick says she is still learning what it takes to run her own business. “It’s a lot different going in, sitting at a desk and collecting a paycheck from someone else, versus waking up every day and forcing yourself to keep moving forward. I’ve learned that to think out of the box, you really shouldn’t be sitting in a box.”

More information is available at JackiEaslick.com.