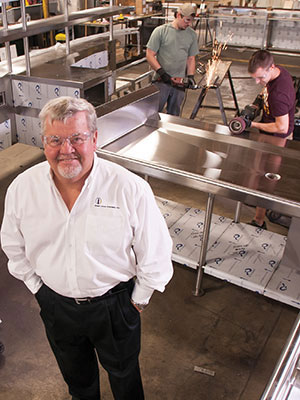 "My experience at Ferris was very good," says Berden. "The things I learned there I took with me into the rest of my life."

After graduation, Berden worked as a mechanic, first for Ryder truck rental and then for the United Parcel Service. In 1976, he left work at UPS to launch his first business, Grand Traverse Refrigeration. As the heating and cooling operation grew, so did opportunities for Berden to diversify; he worked with two local fabricators to outfit his heating and cooling customers' kitchens with stainless steel equipment, cabinetry and surfaces. When those fabricators lost their jobs to restructuring, Berden saw an opportunity to expand. He added a stainless steel shop to his business — and two positions in it for them.

It was a risk well taken: By 1995, the stainless steel portion of his operation had grown so dramatically that it became its own enterprise, and Berden made it a separate company. Today, Great Lakes Stainless Steel provides custom, precision-crafted stainless steel cabinetry and equipment for major developers across the Midwest from a state-of-the- art facility in Traverse City. In 2005, Berden set up a 50,000-sq.- ft., CAD/CAM-equipped shop to allow Great Lakes Stainless plenty of room for continued growth — be it in the size of its workforce or the scope of its services.

"We started out doing cafeteria and back-of-the-house kitchens for Michigan and Michigan State — and then we branched out," says Berden. "We did the Kansas City Royals' and Chiefs' stadiums."

In 2008, Great Lakes Stainless branched out even further. Selling Grand Traverse Refrigeration to an employee to focus his own efforts fully on stainless steel, Berden expanded his services to include custom work for the airline, sign, hospitality and medical industries.

He also recently added a buffing and polishing division and hired three new employees. Currently, Great Lakes Stainless employs 48 members of the Northern Michigan community — numbers which are steadily on the rise.

Throughout all of its remarkable growth, Great Lakes Stainless has never compromised quality. The company's emphasis on precision craftsmanship and excellent customer service earned Great Lakes Stainless the Traverse City Chamber of Commerce's Small Business of the Year Award in 2010 despite a record number of nominations, an honor which Berden attributed to the hard work and loyalty of his staff.

"It was my employees who thought enough of the company to put us in this position, that I would be in the forefront to receive the award," Berden said in his acceptance. "I think that speaks highly of our company. If the employees think it's a great place to be and work, then you've won."

There would soon be even more recognition, as Great Lakes Stainless earned a coveted spot on the Crain's Detroit Business 2011 list of 50 Michigan Businesses to Watch, a reflection of Berden's expansion into Southeastern Michigan and the Great Lakes region, as well as the versatility of the business he and his employees have grown. Under Berden, Great Lakes Stainless has always been ready to perfect a new craft, a perspective that he credits in part to his time at Ferris.

"I tell people that there were four main things about my time at Ferris that have really stuck with me," says Berden. "I had a good math teacher, and a good speech teacher, Mr. Williams. I had an automotive HVAC class that I really liked. And, in my last semester, I had a class that really emphasized the importance of lifelong learning — that, for the rest of your life, you should learn something every day."

Berden's sense of continual development and innovation has led him to collaborate with inventor Jerry Sheren in a new project that is poised to offer great benefits to community children. A mechanical contractor who had serviced Northern Michigan schools' ventilation systems for years, Sheren had invented a system to dramatically boost schools' energy efficiency and air purity, but he needed help developing his design and fabricating a model in stainless steel. Working together, Sheren and Berden developed Aristotle-Air, a retrofit for existing school ventilation systems that maximizes free heat energy exchange.

The system uses the heat of the outgoing air to supply three-fifths of the total heating needed to bring the incoming air to temperature, meaning that only two-fifths of the energy needed to bring rooms to temperature must be supplied by the school's existing heating system. Schools implementing Aristotle-Air could save more than 40 percent of their energy costs. The system also purifies air more effectively, thanks to Berden's addition of a germ-killing UV system that prevents the spread of airborne illness. In beta testing, the system exceeded government air purity standards and reduced absenteeism dramatically.

Helping to save schools from rising energy costs and children from illness seems to be all in a day's work for Berden, who, when asked about his proudest achievement so far, doesn't mention a famous stadium or prestigious award.

"We've been able to build businesses that employ a good number of people locally, and that's good for their families and our community," he says. "Helping people is my thing, and there's always more to be done."