For Josh Bannister, working internationally is par for the course

If there's such a thing as having too good of a resume from work experience just months after graduating from college, Josh Bannister (B'09) might have that problem. His first job was golf operations manager at Ocean Dunes Golf Club, which has a Nick Faldo-designed 6,746 yard par 72 layout nestled in a booming resort town. Bannister organized tournaments, worked on international marketing and even managed to write a monthly column for a golf magazine -- an especially remarkable feat considering he didn't know his target audience's language. 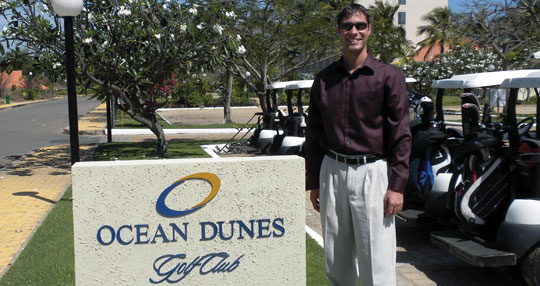 "Vietnamese is a very difficult language to learn," says Bannister.

Ocean Dunes is located in Phan Thiet, a South China Sea coastal city in the southeastern part of the Socialist Republic of Vietnam.

While Americans might still have images of Vietnam that date from the time of U.S. military involvement there, according to Bannister the country is increasingly becoming known for its manicured fairways -- although it's still one of most underdeveloped golf markets in southeast Asia.

"Right now there are 20 courses that have been built throughout the country," says Bannister. "There are about 75 open contracts to build courses by 2030. Not all of those contracts will be filled, but it's a very up-and-coming industry there. It's very competitive because of the small number of courses. But, at the same time, everybody knows everybody, and everybody helps everybody. The golf professionals get together, and we exchange ideas. There's a lot of room for growth -- it just requires bringing in the right management."

Like many developing countries Vietnam is looking to attract foreign capital, which accounts for the fact that about half of Ocean Dunes' customers come from abroad. Approximately a quarter of the resort's guests are European, while another quarter are Korean. However, that still means that about half the play comes from within the country. One of Bannister's fondest memories of his time at Ocean Dunes comes from organizing a golf tournament for Vietnamese players.

"The players really enjoyed the tournament and left saying they wanted to come back again and would tell their friends about it," says Bannister. "That told me the team I worked with there did a great job. If you can work in Vietnam and be successful with events, you can do it anywhere."

Bannister spent a year at Ocean Dunes before taking a position in December 2010 at the Cliffs at Walnut Cove in Arden, N.C., where he had interned as a Professional Golf Management student. "I was at the Cliffs for nine months and really enjoyed my time there," says Bannister. "After graduation, I kept in contact with the head golf professional. We both wanted the situation to work out right after graduation, but that position wasn't available. Vietnam came across the table and there was no reason not to take it. The same goes for when the Cliffs actually did have a position open up. They contacted me, and there was no reason not to take it."

Ocean Dunes was a unique opportunity for Bannister.

"Be adventurous. Try something new. If that means moving around for a couple of years, do it. You have time to do those things now and learn what you really want to do because you've seen some other things."