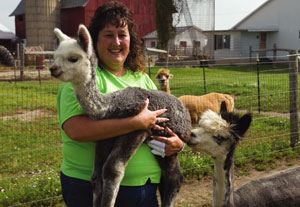 Nancy (Slagell) Rogers, a 1987 graduate of Ferris State’s College of Business, is “hooked on alpacas.”

“One night I was up late watching TV, and this infomercial came on about alpacas. From that point on, I was hooked,” she said. “My husband had cattle on the farm, so why couldn’t I have something to tend?”

It was an unlikely purchase for Rogers, who always said she’d never marry a farmer. Farming wasn’t the life she wanted to have, nor the life she wanted her children to have—she’d had her share of picking rocks, pulling weeds and hoeing fields. So she also never thought she’d fall in love with and tend to animals.

Alpacas have been raised in the United States since 1984 when they were first imported and are bred for their fleece as well as the sale of cria, or young alpacas. They are shown at registered alpaca shows and fairs all across the country, and after Rogers and her mother, Pat, experienced them up close and personal, they both agreed it was something they should do together.

Rogers told her husband to “clear out the old pony barn because we’re buying alpacas!” Rogers and her mom have now been raising alpacas for six years now and don’t regret their decision for a minute.

“Believe me, it’s not all hugs and kisses, but the rewards and benefits of having these animals is amazing, Rogers said.”

They utilize every bit of the fiber from their herd of 20 registered alpacas for hats, mittens, purses and other items. “We don’t let any of it go to waste,” noted Rogers.

In addition to caring for her alpacas, raising two daughters and helping her husband manage the family farm, Rogers is a case worker for the Department of Human Services in Clinton County. She is also director for the Michigan International Alpaca Fest and leader for an alpaca 4-H club in Gratiot County. She hopes to expand her alpaca operation in the near future.