The Institute Goes to War

W.N. Ferris had been back from the governor's office only 15 months when the United States entered World War I.

The student body was filled with patriotism and enrollment began to dwindle. Mr. Ferris was gravely concerned that this was the end of his school. Even before the United States officially entered the war, the clouds of war hung over the campus. Male students were uneasy as many felt it their duty to enlist.

In July 1918 Mr. Ferris wrote to his mother to say, "Our graduating exercises took place last week. Everything went off pleasantly in spite of the fact that 19 of our graduates were in the army and many more were hindered from graduating because of the draft.

"The new draft will strike the school hard."

"The second summer term opened with a larger enrollment than usual. This will help out with the year's loss. The great majority of the students are women." In September he wrote again to his mother saying, "The new draft will strike the school hard." 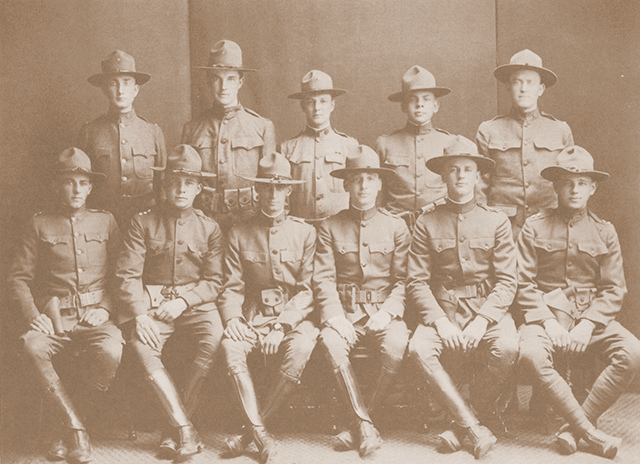 The women in the school joined the ranks of the Red Cross. Nearly 100 of the girl students went to the Red Cross headquarters each Wednesday night making surgical dressings under the leadership of Miss McNerney and Mrs. Alice R. Ford who taught typing. According to the 1918 Crimson and Gold, "The work done was magnificient."

The student body was filled with patriotism and enrollment began to dwindle. 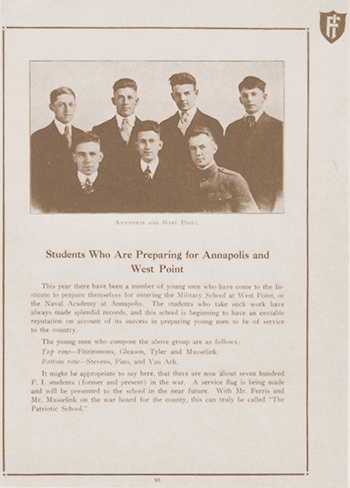 This page from the 1919 Crimson and Gold shows the class preparing for the nation's service schools. The man standing at the right is Laurence Masselink, son of Gerrit Masselink.

The Ferris Cooperative Association presented the Institute with three flags measuring 10 feet by 20 feet, and the Institute purchased and erected a 70-foot flag pole on the front lawn. Presentation of the flags was made by C.C. Barnes, president of the Ferris Cooperative Association, in an impressive ceremony before the student body. Mr. Ferris officially accepted the flags.

According to the Crimson and Gold, "It was an impressive sight as the flag rose to the top of the staff and folds spread out against the cloudless sky. Every good day since, the flag has been kept flying to remind the school of the privileges and opportunities of being under the Stars and Stripes."

"Every day letters come to the school from boys in camp or overseas; they are full of the spirit of optimism and courage."

Said the Crimson and Gold editor, "The war spirit caught the boys early, and three military companies (ROTC units) have been organized during the school year. Some of the students had previous military training and they displayed the vigor and 'pep' of veterans. Many of these same boys are 'somewhere in France.' The faculty was not far behind the spirit of the times and a number of them are now enrolled in the Michigan State Troops, better known as the 'Home Guards.' "

Cooperative Association president Barnes was appointed chairman of a drive for the Y.M.C.A., and a goal of $500 was set. In less than an hour, $1,275 was raised and sent to New York for "The War Friendship Fund."

E.M. Clark served as chairman of the Knights of Columbus campaign which raised $200, and the Salvation Army received $20.

Clark also served as chairman of a speakers bureau, and members of the faculty went out throughout the county speaking on the Liberty Loan, War Savings Stamps, Food Conservation and the Red Cross.

The Department of Music performed at many public meetings, and Ferris singing groups were credited with enhancing the "sales pitch" for the war bonds. The Crimson and Gold editor estimated that students and faculty bought more than $50,000 worth of war bonds for "keeping until the war is over."

Mr. Knisley was appointed by the government as authorized sales agent for war savings and thrift stamps. According to the Crimson and Gold, "The sale of stamps has averaged $10 a week ever since it was started, and this in spite of the fact that many of the students have left, or purchased bonds . . . .

"Every day letters come to the school from boys in camp or overseas, and they are full of the spirit of optimism and courage. The school is having a service flag made to honor the boys who have gone. The stars now number more than 750 and are being added each day. The flag is to be dedicated on Memorial Day with fitting ceremony."

The Ferris chapter of the Y.M.C.A. perhaps suffered the most severe blow by the U.S. entry in the war. Of the 14 officers elected in 1917, only four returned to their posts in 1918. The newly elected president left his post shortly after the first of the year and there was no certainty among the other members about their return to school. This was typical of the attitude which pervaded all the student organizations. 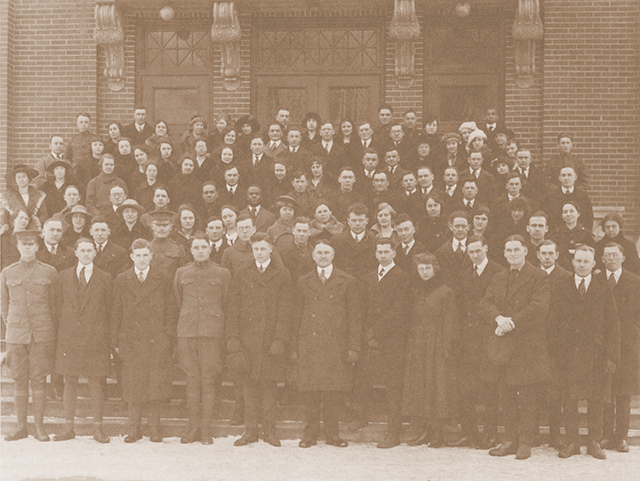 Pictures of the classes during World War I usually showed many men in uniform. This is a photo of Gerri Masselink's Bible class of 1918. He is standing in the center of the front row.

The Reserve Officers Training Corps remained a program at Ferris after the armistice was signed. Units were established in all colleges and universities that met the requirements of the government. A student completing part of the work in one school had his credits in this branch of education accepted in any school he attended later. Mr. Ferris insisted that the group participate in nonmilitary activities. One of their most spectacular feats was their participation in rescue work during the city's Mercy Hospital fire in 1919.

Opportunist that he was, W.N. Ferris started a course for young men who were interested in preparing themselves to enter the Military School at West Point or the Naval Academy at Annapolis. The six-week program was a crash course in which students studied all previous entrance examinations for the two schools. Mr. Ferris continued this program after the armistice. During this term as senator, Mr. Ferris frequently was asked to sponsor a student for Annapolis or West Point. Sometimes, when he didn't think the candidate was fully qualified, he didn't push very hard.