After Masselink's death, several faculty members sought the presidency. A third member of the big three who had helped develop the Institute along with Ferris and Masselink was Bert S. Travis. But Travis did not automatically succeed to the president's office.

Travis, who attended Ferris in 1892, had joined the staff as a teacher in 1896. As business manager of the school, he served as "president" on several occasions when Ferris and Masselink were both absent from the campus.

However, on the night of Masselink's death, E.J. Parr, head of the Pharmacy Department, called a meeting of the faculty asking that the faculty support him in his bid for the presidency. Since too many other faculty members thought they might have a chance for the presidency, Parr did not get enough support for his bid.

Many faculty members thought they might have a chance for the presidency.

Instead a committee was chosen to serve as advisory board for the school. Travis was to assume the management, assisted by G.C. Baker, E.M. Clark, K.G. Merrill, and Parr. Grover C. Baker, the registrar, had joined the faculty early in the 20's. His first assignment had been as a student recruiter. Emmanuel M. Clark, of whom it was said could give a succinct history of the world during a 10-minute talk, was a graduate of Oswego Normal School and thus the third person at the Institute to have exposure to the Pestalozzian concept. He was given the title of vice president on Masselink's death and for two occasions served as acting president in the interim years between 1930-40. He served the college for 40 years. 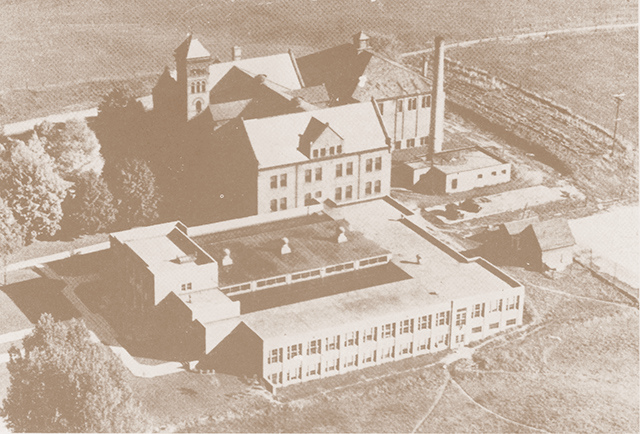 After the construction of the Alumni Building in 1929, the campus remained virtually as shown until 1950.

Clark at one time was elected president of the Michigan Historical Association, and he is credited with helping Gamma Phi Sigma fraternity organize the first Ferris Homecoming.

Karl G. Merrill also had been a student at Ferris, attending from 1900-1902 when he earned his life certificate in commerce teaching. He had come to Ferris shortly after World War I and remained at the school for 36 years, serving as dean of commerce, vice president, and acting president in 1952.

The new governing board opened up the salary question.

The 1929 Crimson and Gold had been dedicated to Ernest J. Parr, with the caption noting that he was "outstanding for the building up and maintaining of the strong department of which he is the head -- a confidant, advisor, and the pal of his students . . . ." Parr, too, had joined the staff in the early 20's; thus, he, Merrill and Baker were relative newcomers to the faculty. 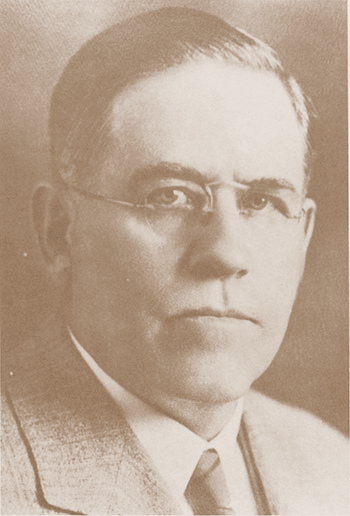 Travis' salary on Sept. 26, 1929, was listed as $10,000. The other members of the advisory board were being paid salaries of $3,500. At the trustees meeting Nov. 2, 1929, Travis was given another $3,800 salary increment for extra services. Mrs. Masselink was awarded $2,500 for services rendered in the interim after Masselink's death during the fiscal year which ended Aug. 29, 1929. During the reorganization process following Gerritt Masselink's death. Mrs. Masselink served as chairman of the Board of Trustees.

During Mr. Ferris' time and during Masselink's short tenure as president, salaries had not been discussed publicly. Each teacher had a conference with Mr. Ferris or Mr. Masselink, and it was assumed that each one would receive as much as during the previous year until an increase was offered. But the new advisory board opened up the salary question, by posting each one's wages, thereby causing some consternation among the faculty ranks.

In announcing the advisory committee, the press release reported that this arrangement would continue until a suitable successor to Mr. Masselink could be chosen.

Of course there were many questions concerning the future of the school -- the building program was in operation and the clouds of the Great Depression were looming, but the public was assured that the aims, ideals and traditions of the school established by Ferris and Masselink would be carried on.

A search committee began a comprehensive review of candidates for the presidency and selected a qualified one. Just before he was asked to take the post, the trustees realized there wasn't any money to pay him. A,A. Worcester, a local attorney, agreed to assume the presidency without salary, charging only administrative costs for executing documents.