As it grew into its second decade the school offered more and more opportunities for its students to learn how to make a living. To better reflect its mission the name was changed to "Institute."

Changing the name from Industrial to Institute was no easy task; the alumni didn't like it. The name "Industrial" was good enough for them and it should be good enough for future students, was their thinking. Even W.N. Ferris would have preferred to keep the name Ferris Industrial School, but the public thought it ought to be more than an industrial school, and so about 1900 it became The Ferris Institute.

In the late 1950's when Victor F. Spathelf, the 10th of the College's presidents, attempted to change the name from Institute to College, he ran into a similar protest from the alumni, who wanted the school to remain an institute. Spathelf's first attempt to change the name was aborted and the idea tabled for a few years.

At the end of the second decade, the philosophy of the school is reported in the 1903-04 catalog. Presumably written by W.N. Ferris, the catalog states:

tt . . The erection of a new building, however, was only one of the steps in the development of the institution. With the new home came new demands; with increased facilities came also an increased attendance. From this time on the school took on new life. The courses were broadened; specialists were engaged; new departments were added. In addition to its normal work, it now began to prepare annually a large class of advanced students for the teachers' state examination (life certificate courses). A college preparatory department was also organized. Soon after it was placed on the list of approved schools by the University of Michigan. Other colleges and universities of like standing recognized it.

"In this phase of its work, the preparation of students for the higher institutions of learning, the school met with unusual success -success not only in making the department popular, but also in that its graduates proved themselves worthy, intellectually and morally, of the school which sent them forth.

"The rapid growth of the college preparatory department is mentioned merely to indicate the development which has taken place along all lines. Perfection and progress have been the watchword in all departments. Its growth as a whole has been symmetrical, and in many ways phenomenal. Without further comment, its history may be summed in the following statement: Nineteen years ago a single room and 15 pupils; today fine modern school buildings and an annual enrollment of 1,800 students. In view of the fact that the school has not a penny of endowment, and that it has grown during a time of great financial depression, the history is surely as remarkable as it is significant."

The best light on the intentions of the school is reported in a section of the catalog under the heading of "Mission:"

"The phenomenal growth of the school has not been the result of chance; back of it all there has been a well defined plan. The Ferris Institute has a mission. It has not made war on the public schools; it has not aped the colleges; nor has it resorted to sensational methods of advertising. It has opened its doors to the people; it has appealed to them from the standpoint of nineteenth century education. The bright student and the backward plodder, the child in the kindergarten and the gray haired man have all found within its walls welcome and inspiration. Its only entrance requirements have been a thirst for knowledge -- a desire for growth. It has for the backward student infinite patience; for the mentally quick, rich rewards. 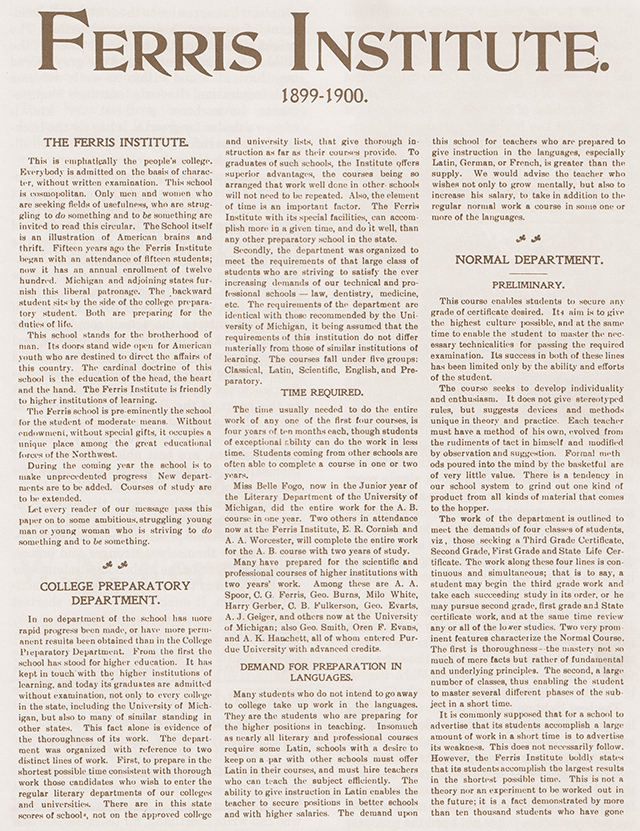 The school was organized to meet the demands of three classes Of students. First: That large class of men and women who, early in life, were deprived of the advantages of school but who in later years have come to feel the need of an education. To this class Ferris Institute has been a godsend. For them its doors are always open and it is not strange that hundreds of this class, many of them 25 years of age, have entered the school sometimes for only six weeks, oftener for three months, and frequently for one year, in order to be assisted in developing their capacity for usefulness. It is this feature of the school today that lies nearest to the heart of the President. He feels that those who have had superior advantages in early life, those who have already occupied good positions, are best able to take care of themselves; in other words they need the assistance of the schools of this country least.

"Its graduates proved themselves worthy, intellectually and morally, of the school which sent them forth."

"The Ferris Institute will, therefore, continue to appeal to all young men and women, regardless of their present conditions, who desire to make themselves stronger and better. Second: It offers to the ambitious student who has his own way to make in the world a practical education. It enables him in the shortest possible time consistent with thorough work, to fit himself for a useful position in life. In the great world today there is a demand for bookkeepers who can keep books, for stenographers who can write shorthand, for teachers who can teach; in other words there is a demand for people who can do things well. The school has met this demand, and as a result thousands of its students are today holding responsible positions. Along this line it has won the greatest victories. Nothing succeeds like success. This school has succeeded in a remarkable degree, and its students have been benefited thereby. Third: From the first, the school has stood for higher education. It has kept in touch with the college and the university, and today its graduates are admitted to the University of Michigan and other institutions of similar standing. To the student who contemplates a college course, this school offers a rapid but thorough preparation."

"In this great world today there is a demand for people who can do things well. This school has met this demand."

Much of the foregoing statement is pure Pestalozzian philosophy, especially the part about those who were deprived of advantages of school in early life and need the school to develop their capacities for usefulness.