The war over, the world again "safe for democracy," Mr. Ferris made a few more claims for his school in the 1920-21 issue of his catalog:

"The Ferris Institute," he said, "occupies a unique position in the educational system of the Northwest. It is not a high school; it is more. Its business is not the exploitation of some pet system, or the grinding out annually, by 'hook or crook,' a certain number of `graduates.' The question of system and graduation are made secondary; the questions of development and the acquisition of power are still primary. Every student is given large liberty, both with respect to choice and number of studies. This does not mean that he is left without supervision, but it does mean that the student who is fitted physically and mentally to move rapidly with his studies is given every opportunity to make the very most of his time. The school is remarkable also because of the position which it bears to the higher institutions of learning. Today its graduates are admitted without examination, not only to every college in the state including the University of Michigan, but also to many of similar standing in other states. This fact alone is evidence of the thoroughness of its work."

The 1920-21 catalog announced the Ferris Institute cafeteria. It had this to say: "We have provided meals (self served) to an average daily total of 450 students. This has been done with an average saving of $1 per week for each student. We have tried to eliminate all profit for the Institute. At the same time we have tried to show our appreciation of the efforts of city restaurants and private boarding houses. We are simply trying to remove obstacles from the pathway of young men and young women who are desirous of securing an education."

When he first opened the cafeteria, Mr. Ferris ordered all foodstuffs from Chicago. It came by freight car to Big Rapids. The city merchants were furious because Mr. Ferris had tried to save money and buy the things wholesale.

"The question of development and the acquisition of power are still primary."

But Mr. Ferris forgot to buy sugar. He went to the town merchants for this item, but none would sell him any because he hadn't bought anything else from them. 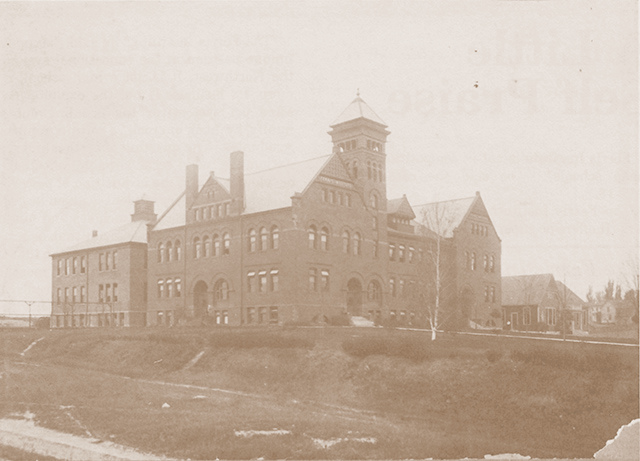 By 1920, the campus of Ferris Institute had expanded to this point. In the center is the Main Building, with the Pharmacy Annex to the left and the Music Hall to the right.

But O. O. Bishop, one of the teachers, saved the day. He went to a nearby sugar plant where many Ferris alumni worked. They came up with a truckload of sugar which Mr. Bishop hid under the stairway to the basement of "Old Main." The town merchants did not soon learn of this subterfuge.

The city merchants were furious because he had tried to save money and buy things wholesale.

A new educational concept, straight from Pestalozzi, appeared in the 1920-21 catalog under the heading "Class Drills and Personal Help."

It said, "Individual instruction in many schools really means that the student who asks questions gets information, while the backward or timid student is, to a great extent, neglected. It also means that only points discovered by the student receive attention while others of equal importance are overlooked.

This is because in many schools there is no daily drill class. We give both class and individual instruction.

"Special classes are conducted whenever needed for those who find it difficult to keep up with the regular work or who need more instruction than the average student; they merely supplement the regular class work and personal assistance which are strong features of the every-day work of the department.

"This system of helping each student in the class and while at his desk has much to do with the high standard of excellence reached by our graduates."

The 1920-21 catalog had some other tidbits for student enticement. Business students were allowed the privilege of taking, without extra tuition, physical training, public speaking, band and orchestra music. There was, however, an extra charge for typewriting classes.

This catalog also requested parents to write to the school concerning the progress of their sons and daughters.

The 1920-21 catalog offered bookkeeping by mail, an accommodation for students who wished to work at their desks on bookkeeping or at typewriting on Saturdays. There was "an evening school for $1 a week for students who fail in their work because they don't have the power to apply themselves."

This catalog also requested parents to write to the school concerning the progress of their sons and daughters. Inquiries were to receive prompt and careful attention.