First A School, Then A Bank

In 1902 W.N. Ferris made his first attempt to become a recognized businessman of Big Rapids. He started a bank, the Big Rapids Savings Bank, now the First National Bank and Trust.

With $13,000 cash, W.N. Ferris purchased 130 shares of stock. Other stockholders bought five or 10 shares each. Ferris rented space in the Comstock Building, now the Nisbett Building, where the Comstock Bank had been. First meeting of the Big Rapids Savings Bank was March 19, 1902.

Being a major stockholder, W.N. Ferris became the president of the bank, a position he held until his death in 1928. In the 1920's he built a new bank building, considered by many businessmen as the finest building Big Rapid.; had had. This building is now occupied by the Intermediate School District.

Being a major stockholder, W.N. Ferris became the president of the bank, a position he held until his death in 1928.

One of the questions has been: why did W.N. Ferris want to start a bank? The Citizens State Bank, now Central Michigan Bank and Trust, had been organized a year before while he was building the Pharmacy Building. Perhaps Ferris felt a trifle superstitious, believing that the bank would fail because he was putting up a new building, as two had done while he was building two earlier structures. 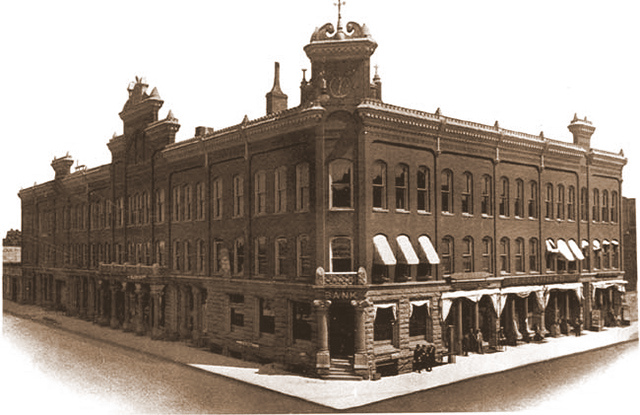 Mr. Ferris opened the Big Rapids Savings Bank on the first floor of the Nisbett Building a the corner of Michigan and Maple. The bank shared the ground floor with the newspapers the Bulletin and Herald, the Big Rapids Gas Co., Singer Sewing Machine Co., Crandall & Miles, George Milner, J.C. Jensen & Co., and C.D. Carpenter. The upper floors were devoted to the offices and armory of the local military company.

Was he concerned about the money he had on deposit that belonged to his students? Was he concerned as he claimed to be that if he died his family would be without means of support? His life insurance was pledged to the school as collateral on the buildings. The bank would add additional income for his family's protection.

There was one story circulating that W.N. Ferris started the Big Rapids Savings Bank because he felt that the Citizens State Bank was charging too much interest and not offering enough services. Mr. Ferris emphasized the need for bank services in a speech in 1924.

While he was governor, many of W.N. Ferris' recommendations to the legislature concerned bank reform and controls.

The main question is still unanswered. Where did W.N. Ferris get $13,000 to start the bank, a considerable sum of money in those days? He was constantly complaining that he could not make any money with the school, and it seems unlikely that he would have a $13,000 surplus. 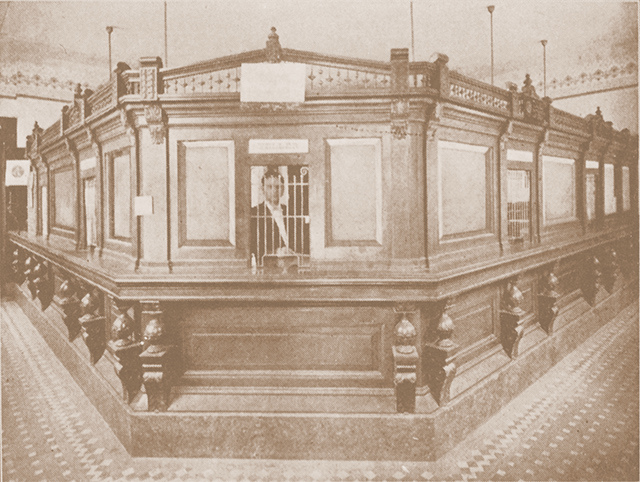 This photograph of the bank's interior was taken from a city publication dated 1906.

No records have been uncovered that Helen G. Ferris inherited any money, although she well could have. Under existing laws it would have become her husband's to do with what he desired. In those days women couldn't even vote.

At one time Ferris reported that he made about $1,000 a year on his speeches. He was of the temperament where he would save his speech money for a personal nest egg. Very likely this is what he did, and this is the money he put into the bank.

While he was governor, many of W.N. Ferris' recommendations to the legislature concerned bank reform and control.

The bank presidency did give him an entree into the business world of the county. And what an important person it made him -- a bank president and also a college president.