Mr. Ferris Holds onto the Reins

Before he went to Washington in 1923 to take his seat in the Senate, Mr. Ferris sold his school. Most of the stock went in equal amounts to vice president Gerrit Masselink and business manager Bert Travis.

Travis (photo, left), along with Masselink and Ferris, was one of the three people who guided the school through its early years. He joined the staff in 1896 and for 30 years served as business manager and secretary-treasurer. He was literally a one-man bookkeeping department. 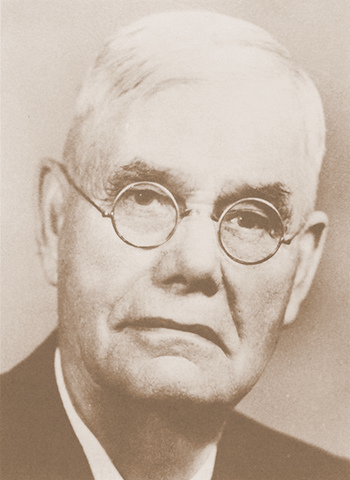 Although he was nearly deaf, he also carried a heavy teaching load which included instruction in elementary grammar, spelling, civil government, physiology, arithmetic and geometry. He also ran the Ferris bank, taking deposits for and meting out allowances to the students.

Thus it was not surprising that he and Masselink took over the responsibility of the school while Mr. Ferris was in Washington. Not many people, including Mr. Ferris, knew that Mr. Ferris was no longer boss.

Even though the Masselink and Travis investments amounted to $35,000, making them the principal stockholders, W.N. Ferris continued to act like the president of the school and to hold the title.

Masselink kept Ferris apprised of everything that was happening through a series of progress reports. By 1925 the progress reports had become a weekly activity for Masselink.

Travis was supposed to keep Mr. Ferris posted on tuition records, and Carlisle was charged with keeping him informed of enrollment records. Neither sent Mr. Ferris the records regularly, and Mr. Ferris continuously carped at Masselink about it. 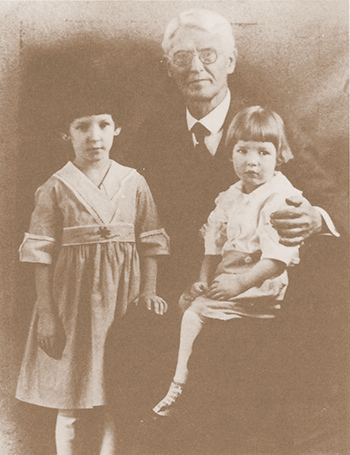 W.N. Ferris poses with his grandchildren, Helen and Woobridge about 1922.
"Congressmen were receiving $5,000 a year, but they could purchase more food, more rent and more living provisions that $15,000 will now purchase."

Annoyed by Carlisle's failure to report to him, Ferris kept writing to Masselink saying that he was going to have nothing more to do with Carlisle, and that he would get his figures from a secretary. Ferris seemed to think this would hurt Carlisle's feelings, and he kept harping on it in his letters to Masselink.

Some things in Mr. Ferris' letters to Masselink were not about the school. In one W.N. said, "I would not have you think that the Democratic party is dead. In the House it is without organization. There are many Democrats in the Senate who feel as I do and will in the next session of Congress make an effort toward some kind of a definite organization."

"There will be much unfavorable comment on the proposed increase in the salaries of Congressmen, etc., I was not in the Senate when the matter was brought up. It was passed in a cowardly way. There should have been a roll call in both Houses. The increase is justifiable. At the time Congressmen were receiving $5,000 a year, they could purchase more food, more rent and more living provisions than $15,000 will now purchase, but, if there are thousands and thousands of workers in the same position, the conduct of Congress may be regarded as decidedly selfish. I think that the President will veto the provision."

In another letter he asked Masselink to attempt to track down all former Ferris Institute students who were working in Michigan banks.

In late June 1926 Mr. Ferris wrote: "The diplomas arrived here yesterday, Monday, June 28. Within an hour I had signed them and finding that I would be obliged to send them as first class matter if I sent them by the post office, I insured them for $175 and sent them by express. You will please be on the lookout for them."

The letters back and forth between Ferris and Masselink contained all sorts of items of information, weather reports, conditions of health of friends and faculty members, political situations, and requests for information.

In one letter Ferris wrote to Masselink to say, "Your letter of the 4th is at hand and you have now put yourself on record as affirming that you will not vote for Al Smith. I do not view the running for the Senate in the way you do. If you are nominated by your own party and your own party supports Al Smith, your own party cannot very well afford to support you unless you are loyal to the party."

On Feb. 16, 1928, Mr. Ferris first complained about being ill. "I have been ill since Feb. 1," he said. "Not one day since Feb. 1 have I been well. I have had a cold in the head and lungs since I visited Hampton, Virginia, and the cold has annoyed me beyond measure. I just drag myself around and cough while I am dragging myself. At present the indications are that I shall be obliged to take a short vacation and rest up. That proves positively that I am getting old."