The Plan for Growth

Its buildings getting old and obsolete, the Institute in 1925 decided to launch a building fund, hoping to raise $1,500,000, of which $750,000 would be used for buildings and the rest for an endowment fund. At that time the annual income from tuition was about $100,000. The annual expenses were approximately the same amount.

Income from tuition was about $100,000. Annual expenses were approximately the same.

Mr. Ferris from his senatorial desk in Washington and Masselink from his desk in Big Rapids started a preliminary fund drive in Big Rapids which raised about $20,000 in pledges.

The next move was to hire the Ward Company, a fundraising firm from Chicago. Mr. Ferris had his doubts about this process but allowed himself to be "talked into it." At one time he said that he could not help but think that the Ward representative was crazy. "I will say that it would require a crazy man to raise a million dollars for Ferris Institute."

In a letter dated Jan. 2, 1926, Mr. Ferris said: "I was scared stiff when I received your letter concerning the Ward Company. It is all very beautiful for the Ward Company, but we should be everlastingly damned if we were to use the money raised in Mecosta County to pay expenses and then fall down on the general plan. Evidently the Ward Company does not furnish any guarantee. Of course the fact that other organizations have employed the Ward Company means something, but it does not mean enough to make the venture worthwhile. If we get down to business, we can raise our $100,000 by next June . . . . I claim that after we have raised $100,000 our problems are settled."

Mr. Ferris' concerns were well founded because the Ward Company did not succeed in raising enough money to cover its expenses even though a very elaborate campaign was set up. Some of the trouble seemed to be in the lack of expertise on the part of the chairman chosen from alumni to head the various committees.

From the Senate, Mr. Ferris wrote on April 30, 1926, "Previously I wrote you a letter stating that possibly I might manage to send some money for the initial cost of training to raise money for the Ferris Institute. If you will tell me to whom I can send $500, and I can receive the legal acknowledgement, I will forward it immediately.

"As I have said in a previous letter, I give no accounting of the money I send. If everything goes along all right, I may send some more later on."

Masselink soon assessed the problem explaining that "they (the Ward Company representatives) wanted to sit down and smoke and dictate a few letters on the typewriter, and have Ferris Institute go out and raise the money." He felt that if Ferris Institute was going to have to do the work, it might as well raise the money by itself.

W.K. Kellogg and his brother John had amassed a fortune in Battle Creek with a cereal company and a health spa. W.K. had two grandsons, John and Keith (W.K. is W. Keith). John was the type of person who applied himself, but Keith apparently was not.

"I would say that it would require a crazy man to raise a million dollars for Ferris Institute."

". . The proposition which I made verbally, I am hereby confirming as follows:

"In the event that Keith enters the Ferris Institute and takes the first year's college work, I will sometime during the week of his return to Big Rapids, send you a check for $5,000 to be used for either the erection of a new building or for your endowment fund as preferred. If Keith remains the full year and does satisfactory work, at the close of the school year, when he has finished the equivalent of the first college year work, I will send you another check for $5,000, making $10,000 in all."

"If you can tell be to whom I can send $500 and receive the legal acknowledgement, I will forward it immediately."

Keith did enroll and remained the first year. During that time he organized a dance orchestra and played for many dances during the weekends of the 1928-29 school year. His brother John was editor of the Crimson and Gold that year and Keith, a cartoonist, designed a satirical section for that yearbook entitled the "Black and Blue."

W.K. was true to his word. He sent the first check with a note: "I am sending this check in care of John, as he seems to have the interest of the Ferris Institute very much at heart."

For the most part, though, the school had to content itself with receiving contributions of $100 or less.

The fundraising campaign did not run its course without someone's feelings getting hurt. In the Ferris campaign it was the Big Rapids Service Bureau, a forerunner of the Chamber of Commerce, which wrote on April 4, 1929, to the Ferris Institute officers and faculty:

"It has come to the attention of the Big Rapids Service Bureau that the retail interests of Big Rapids have been criticized by the faculty of the Ferris Institute for the lack of interest in and disloyalty to that institution. 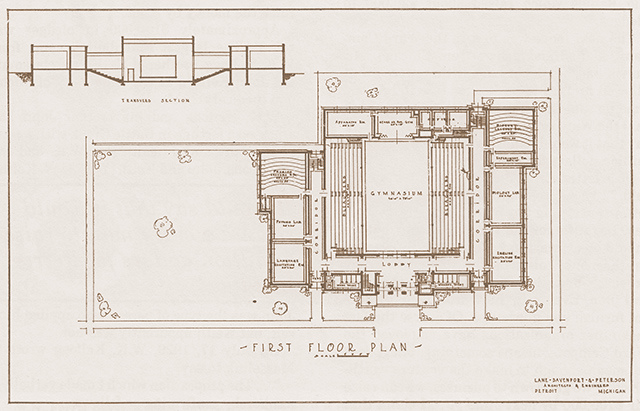 The architect's rendering of the first floor of the Alumni Building was published in a special edition of the Institute News in May 1928. The building was dedicated in 1929.

"This feeling is occasioned by a misunderstanding, and we are anxious that it be overcome.

"Since over $17,500 of the $40,000 raised locally for the Ferris Institute campaign was contributed by the retail interests of the city, exclusive of professional men or individual gifts of employees . . . we feel that they have demonstrated in a very concrete manner their hearty appreciation of the school.

"The retail interests of Big Rapids have been criticized by the faculty of the lack of interest in and disloyalty to that institution."

"We cannot fail to note, however, that this appreciation is not acknowledged by a number of those faculty members who are our critics as the local independent merchant is not favored by their patronage in proportion to the contributions made . . . .