Philinda House wrote a tribute to Mr. Ferris in which she said that Mr. Ferris loved to use a hoe and have a good garden. "I used to wonder sometimes," she said, "how he could go from the Institute to the garden and not need to change his clothes, but he did, and he raised fine vegetables, also beautiful dahlias and gladioli. I do not remember any other flowers except nasturtiums.

He could go from the Institute to the garden without changing his clothes, and he raised fine vegetables.

"The garden he carefully fenced in, because of dogs, and I was always afraid that someone would disturb the absolute rows that he kept. 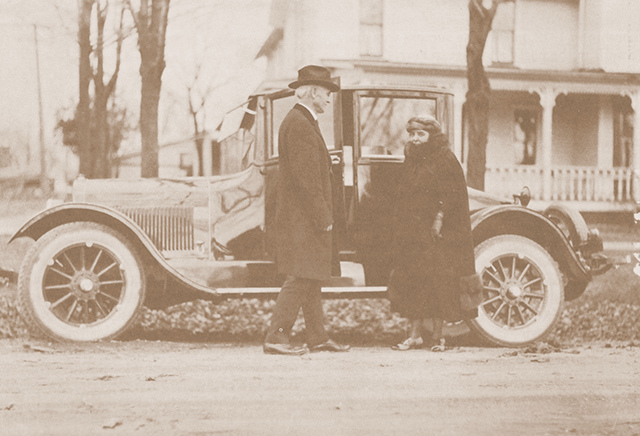 "My God," Ferris exclaimed, "this is Nellie's wedding ring which Carleton lost 18 years ago."

"One day when the garden had been newly spaded, Mr. Ferris said if I would go to the garden he would show me where I could plant nasturtiums. When he reached the place, he stopped and picked up some little thing."

"My God! This is Nellie's wedding ring which Carleton lost 18 years ago!"

"Who spaded this ground?" he asked.

Mrs. House replied, "A boy from the Institute."

Ferris slipped the ring on his little finger and wore it there for a long time.

W.N. Ferris never trusted automobiles and used a horse and buggy as long as possible. Finally, however, he capitulated to the horseless carriage, but he never learned to drive nor could he be induced to try. His second wife Mary Ethel, however, did drive and often chauffeured him around in this Durant. Frank Johnson, a noted auto engineer and Ferris alumnus, was in partnership with William C. Durant to make some of these early automobiles.