In 1949 at age 65, Ferris Institute was again offered to the state of Michigan but this time as an outright gift.

This story really begins in 1936 when G. Mennen Williams, fresh out of law school, was hired by the scholarly Michigan Attorney General Raymond W. Starr to the post of Assistant Attorney General. The two became great friends.

In 1948 Williams was elected governor of Michigan. Starr was judge of the Western Michigan District Federal Court. Williams took office Jan. 1, 1949, and on Jan. 28, 1949, Ferris Institute was offered to the state.

Gov. Williams replied by appointing a special committee to study the feasibility of the state accepting the offer. When he was inter-viewed by the press, President Brophy refused to comment on the offer, stating that it was a matter between the executive committee of the Board of Trustees and the state. But it was known that Brophy had talked to Williams about the feasibility of the state taking over Ferris.

The Story begins in 1936 with G. Mennen Williams fresh out of law school.

However, Donald Worcester of the Board of Trustees said that the "Board had been considering the gift at this time because of long-range consideration." Worcester pointed out that there was no hurry. "We are thinking of 50 years ahead," he said. In 1891 Mr. Ferris had wanted to keep the Ludington deal quiet until there was something concrete to announce. The 1949 Ferris Board had wanted to keep this "deal" quiet, too, until something came of it. But the press did not cooperate. 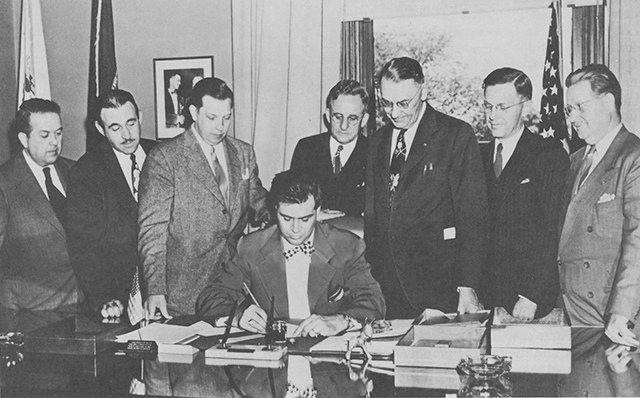 The worth of the campus was valued at $1,300,000 and enrollment was listed at 1,140 students, one of the highest figures in the history of the school.

Within a few days Gov. Williams had picked members of the study committee which was to be headed by Alexander G. Ruthven, president of the University of Michigan.

President Byron Brophy (left) on the grounds near the West Building with board memeber Col. Roy C. Vendercook in 1950.

Brake, Buchman, Grettenberger, Hull, Robinson, Shapero, Smith and VanderWerp were alumni of the Institute. Although Williams was a Democrat, it was ironic that all the legislators appointed to the study committee were Republican; staunch Democrat W.N. Ferris' school was going to be at the mercy of Republican lawmakers.

Educators in the state were opposed to adding another school to the competition for state funds, and they were apprehensive that another school competing for state funds would seek to branch out, duplicating curriculums at existing institutions. Educators did concede, however, that there was a need for a vocational school with a minimum of emphasis on traditional academic work.

On March 7, 1949, the study committee visited the school and generally agreed that the state should take over the Institute. On March 31, Gov. Williams recommended to the Legislature that the state do just that. He reported its value was $816,000, and that it had $200,000 in the bank. He suggested, however, that when the influx of veterans had completed their training, the school might be in trouble. At the time the estimates of percentage of veterans among the enrollees ranged from 75 to 85.

Early in April, Sen. Don VanderWerp, chairman of the Senate Education Committee, announced he would sponsor the bill. State Senator Colin Smith was to co-author it.

The Senate voted 28-0 to take over the Institute, but House approval was expected to be much harder to come by. (It is significant that at the time VanderWerp presented the bill, three schools similar to Ferris were established in New York State, where much of the Ferris philosophy had been spawned.)

Any fear about passage was dissipated when the House approved the bill 83 to 8 on May 10, and it went to Gov. Williams for his signature.

The Governor signed the Smith-VanderWerp Bill in his Lansing office on May 18, 1949. Sen. Smith, the local representative, was given the special signed copy of the Bill to present to the Institute.

Public Act 114, of the Public Laws of Michigan 1949, provided that on July 1, 1950, one of the oldest colleges in Michigan would become the newest state college. The legislative act mandated that Ferris be operated and maintained in accordance with curricula established through the years.

Brophy's salary was raised from $5,000 to $10,000 to compensate for his loss of commission on the tuition fees. 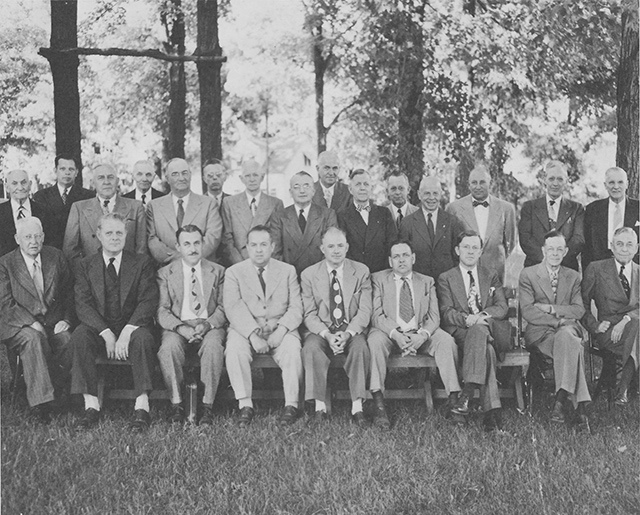 These men formed the Board of Incorporators at the time Ferris was given state institution status. A note on the back of this original print said, "We gave the Institute and $70,000 to the state of Michigan." In the photo, seated from left, are Frank Johnson, Edwin Young, Donald Worchester, Charles Fairman, Arthur Wilson, John Buck, Alfred Cramer, Vern Eldridge and Dr. Gordon Yeo. Standing from left are Joseph Bennett, Colin Smith, Floyd Bouck (who wrote the note), Arthur Martz, Roy Buck, James Young, William VanAuken, Rupert Binney, Jacob VanDyke, Dr. Arthur Zetterstedt, Wallace Henry, Willis Judson, Eugene Ward, J.D. McGlathery and Ray Eichenberg. This picture-taking ceremony was the last official act of the Board before turning the School over to the state.