One of the most maligned projects ever attempted on the Ferris campus was the Carillon Tower. Some student leaders who were supposed to be spearheading the project of building the tower didn't understand what was going on, and instead of supporting the project worked against it. 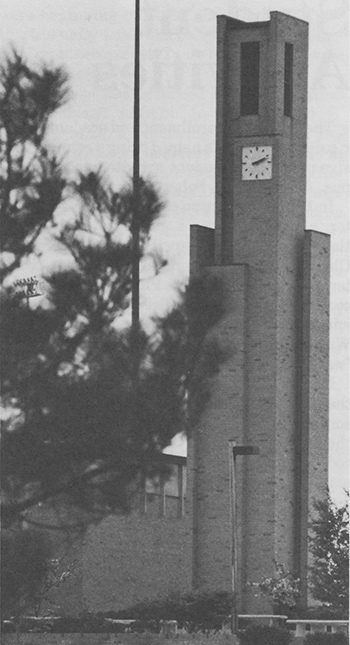 The Carillon Tower, Ferris' only landmark expressly designed as such, was built in 1968 from money donated to the College.

The story begins in the mid 1960's when alumnus Norman Borgerson, retired deputy superintendent of public instruction and a former postmaster of Lowell, Mich., sent a check to the college for $100 with a notation that he had always dreamed of a carillon tower on the campus and he would like to start a fund for it.

The Ferris All College Student Government had amassed about $5,000 in a fund which members hoped would build a bronze bulldog on campus because Ferris had no identifying trademark -- a statue, such as found on many campuses, where students stand to have pictures taken, a statue that is instantly recognized as an identifying mark of the college.

Realizing that the bulldog statue was not feasible for one reason and another, an unofficial faculty adviser for student government suggested that student government take on building a carillon tower as a project that would be an identifying monument for the campus.

Things were such then that Student Government did not dare attempt a project unless it had the approval of President Spathelf. (History of student government projects had shown that too many had to be aborted because they weren't properly thought out.) To avoid student government having to save face with Spathelf, the adviser suggested that the student officers approach the president first and ask if he would like them to transfer the Bulldog Fund to a carillon fund.

(The Bulldog Fund had been in jeopardy on several occasions because student organizations who had lost money on money-making projects would borrow from it to cover their losses, and it was down about $1,000 from its peak total.)

Spathelf s reaction was completely unexpected. Instead of okaying the project and letting the student government officers go back to their group and say, "We have a great idea. Let's build a carillon tower," Spathelf jumped the gun.

Some student leaders were opposed to spearheading the project.

It's reported that Spathelf grabbed a telephone and called a carillon company, practically ordering the set of bells. Spathelf had never thought too much of the idea of a bronze bulldog, and probably had some ideas of his own by this time.

After Spathelf s vigorous endorsement of the project, student government officers were afraid to tell the other members what they had done, and they made no mention of transferring the Bulldog Fund to a carillon fund for several months. Finally they announced the transfer at a meeting which had very poor attendance.

However, word soon got out about the carillon tower, and no matter how hard the adviser tried to explain, the story was that Spathelf forced the student government to turn over the Bulldog Fund to the Carillon Tower Fund.

James Shane, who at that time was an instructor of Architectural Drafting, designed the tower and plans were made to purchase an electronic carillon. Total cost was estimated to be about $28,000.

Immediately all the student organizations were against the project. The Torch wouldn't print a word about it.

The "Torch" wouldn't print a word about it.

The project then was turned over to a college administrator, who had to function despite the students' misinformation. He, with the help of some student volunteers, succeeded in raising nearly $30,000 for the project. The Carillon Tower was dedicated just prior to the Homecoming Pep Rally on Oct.11, 1968, as a gift from the student body, alumni, and friends of the school as an 85th anniversary present to Ferris State College.