It was to this small, isolated, vocationally-oriented school which had established a fine reputation as a private school that Victor F. Spathelf came as the tenth president in 1952. He started full-time in September, but at Judge Starr's insistence he spent one day a week on campus during the summer months. 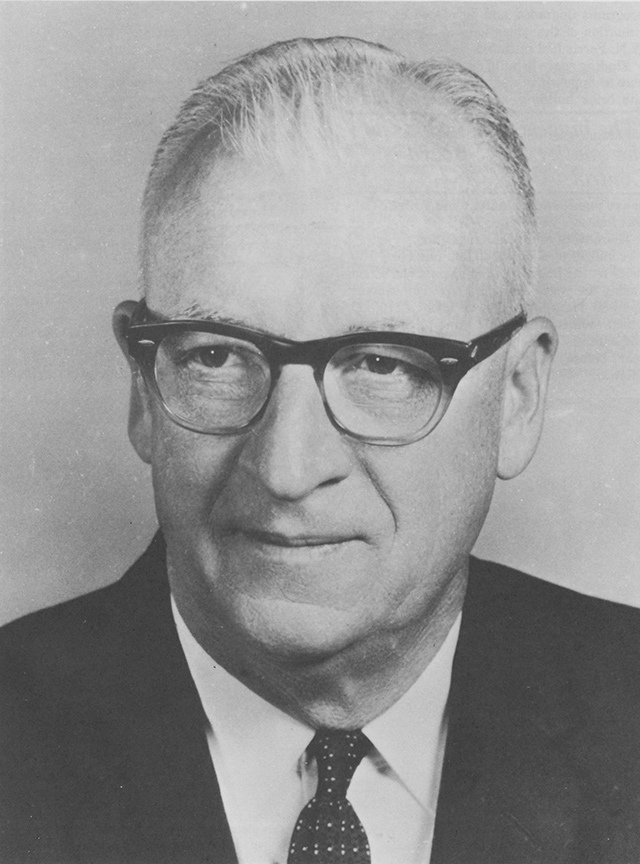 He rolled up his sleeves and went to work. "The biggest plus factor," he says, "was the quality of the Board of Control."

The Board wanted the school accredited and fully accepted by the North Central Association. It wanted dormitories for men and women, and it wanted the trade-technical programs upgraded and developed as a continuation of the educational philosophy that W.N. Ferris had initiated.

"The biggest plus factor was the quality of the Board of Control."

Finding space to build dormitories on an 18-acre campus which was crowded with a tripartite brick building, several quonset huts, a power plant, and a stadium and athletic field was indeed a challenge.

There were other challenges, too.

A budget of about $540,000 had been allocated by the Legislature to operate the school during the year. When he arrived on campus, Spathelf found a surplus of about $170,000, which seemed like a gold mine to those who had administered private school which each year before had come up with a deficit balance. 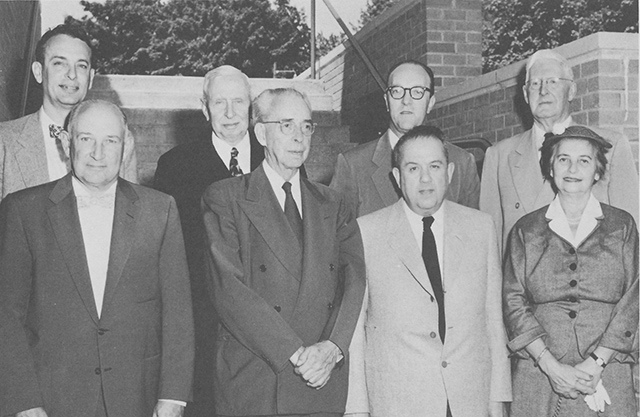 Spathelf knew' that that $170,000 would be absorbed by the Legislature in its next appropriation. The Legislature had changed its rules on budgeting and the budget for the following fiscal year was due one week after Spathelf was to appear on the scene.

It is no wonder the administrators had pushed the panic button.

At one of the faculty get-togethers in the early 1950's Jack Callan, who then was in the teacher education department, had the group smiling with his impression of President Victor F. Spathelf, who also appears to be enjoying Callan's mimicry. On the president's right is Dorothy Milton, and English instructor. To the left of Spathelf are Maxine Reed, who was the staff nurse and assisted with the Physician's Office Assistant program, and Oswald Rossi, who taught psychology and helped lead the Ferris Playhouse.

The budget the school was operating under reflected the private school days. There was not enough money for staff, equipment, or instructional materials. Anticipated tuition revenue was based on the private school rate, which was much higher than that of the other state schools.

Mr. Ferris had been very secretive about his records; the Board of Incorporators had kept minimal records and not in a central location. The result was that there were few records of previous operations to use as a guideline.

Out of a total personnel roster of about 75, 45 people were teaching classes, but many of the teachers were teaching outside of their fields.

One of Spathelf's favorite axioms was "first things first." In this case the first thing was a shift in administrative and teaching responsibilities, which eventually led to some educational department re-structuring.

The next of his unexpected moves probably was the surreptitious purchase of some land for campus expansion. Mr. Ferris had learned his lesson with the press after the Ludington fiasco. Mr. Brophy had tried to "soft pedal" the request that the state take over the Institute, and Mr. Spathelf knew that once the word got out that the school was interested in purchasing land, prices would escalate.

The Legislature assumed that the residential area to the north and west of the campus would make the ideal acquisition for the campus expansion, but Spathelf thought the agricultural areas to the south would be the best, and that is the way the campus went.