By coincidence, the first plot of ground that Victor Spathelf bought for his campus expansion program was the farm which at one time belonged to W.N. Ferris.

Mr. Ferris first bought it about 1913 for $1,500. As his finances changed he sold and rebought it several times. During World War I, Phelps Ferris worked the farm and was exempt from the draft by virtue of being a farmer. Sometimes the Institute owned the farm, and sometimes Mr. Ferris did. In 1918 Mr. Ferris bought it back from the Institute for $5,000, paying $2,000 in Ferris Institute stock and $3,000 in promissory notes.

After Mr. Ferris' death, it was again sold as part of the estate.

Another coincidence is that the first building put up on the farm was called Masselink Commons. Commons (such as in Boston Commons) was the name once used as the pasture land for the community's cows.

When Masselink Commons was new, Spathelf frequently joked with people dining there, that they were sitting in what used to be a cow pasture.

In the case of Masselink Commons, however, the name was used to denote a functional building which served as residence quarters for both men and women students, a food service center, and a campus living room. The food service units and lounges served as the "wall" between the men's quarters and the women's quarters.

The completion of a residence hall building program was no easy feat. Here the Institute was at a decided disadvantage.

The dormitories at other state schools had been built by the state, and when these halls became obsolete and needed replacing, or when additional ones were needed, the schools could use the existing residence halls as collateral for loans on new ones.

By the time Ferris Institute was taken into the state system, the state no longer was funding residence buildings. The residence had to be built with self-liquidating funds. In other words, the buildings paid for themselves from room and board charges.

Ferris had no collateral; thus, it would have to finance 100 percent of the loan for the buildings.

"Fortunately," in Spathelf's words, "we had one piece of good luck. We had a man by the name of Earl Cress who was an expert on self-liquidating projects, who took an interest in Ferris, an unusual interest because of the challenge of it."

Cress sought the help of the Northwest Mutual Life Insurance Company, and he. and Spathelf went to Milwaukee for an interview. Spathelf made such a good impression on the insurance company's executives with his plans for the Institute that he was turned down on his first attempt.

The reason: the Northwest Mutual Life executives thought Spathelf was "too good to be true," and they were sure he wouldn't stay at the Institute more than a couple of years. 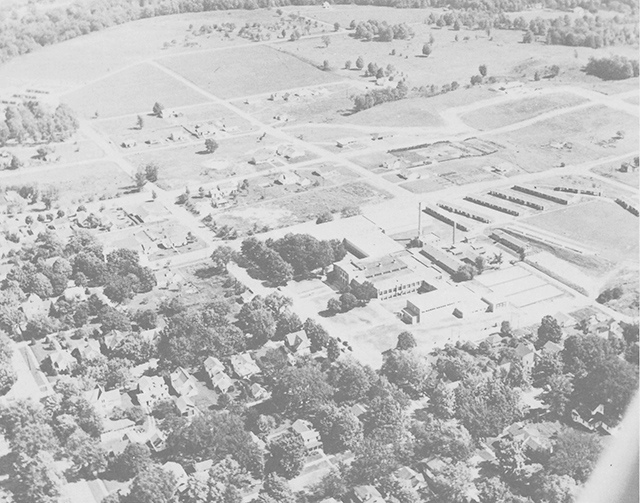 This was the campus as it stood when Victor Spathelf took over as the 10th president of Ferris Institute.

When Cress found out the reason the loan was refused, he reported to the insurance company that Spathelf had bought a farm in the Big Rapids area. This convinced Northwest Mutual's officers that Spathelf had indeed planned to stay at Ferris for more than a couple of years (he stayed at the helm of the College for 18 years). The first loan was granted.

In the meantime, Spathelf had to do a lot more homework before he could start the residence buildings. He had taken a tour of the city, visiting the landlords and landladies who kept students. Some treated their student tenants like members of their own families, but others were interested only in how much they could get from the students. In one place Spathelf found 15 persons living in a house, four of them housed in a rebuilt chicken coop without plumbing.

Commons was the name once used as the community pasture lands.

Even though the Legislature would not fund the residence buildings, its permission was needed before the school could start building them on its own.

At this point, at least 75 Big Rapids residents petitioned the Legislature not to allow Ferris to build residence halls. They were disgruntled because they felt Ferris was going to cut into their revenue from room rental.

The city fathers were disgruntled, too, when they found out that the new residence facilities on the campus were going to strain the city's sewer and water resources.

Spathelf stuck out his chin and played the "bad guy," diverting all the criticism to him and thus saving the Institute and the Board from the negative allegations which followed.