Such was the case with the Starr Educational Center, which was pressed into use with the opening of classes in September 1961. Named for Board Chairman Raymond W. Starr, the building at first provided classroom and office space for the School of General Education, office space for the President and other key administrators, and housed a 1,700-seat auditorium for music, drama, student convocations and auditorium space for civic activities.

The building was dedicated Jan. 7, 1961 on a bitterly cold, snowy day, reminiscent of the day of the Old Main fire in 1950. The poor weather diminished the audience for the elaborate convocation program which featured two bands and an open house.

It was the first instructional building to receive legislative appropriation in five years, but it was not the last.

When the Alumni Building was dedicated in 1929, there were many words of praise written about its wonderful gymnasium facilities, but by 1960 those facilities were not as large as those found at many grade schools.

The basketball floor was so small that the out-of-bounds line was practically in the bleachers. During one season when the team was particularly "hot," students were given odd or even numbers depending on the first letter of their last names and only half of the student body could attend a game on one night.

During the football season there was hardly room in the locker room for the equipment, let alone the men on the team. Some physical education classes were held in the city's Armory, which had a regulation-size gymnasium. The Armory stood in downtown Big Rapids next to City Hall. Students were not too keen on walking or running from such remote places on campus as the "Rock," the site of Brophy/McNerney halls, to the Armory for 7:30 a.m. classes during the winter quarter.

Frank Karas, who helped coach football and directed the intramural program, had to rent courts from the grade schools for the numerous intramural basketball games which went on during the season.

With all this ammunition about old facilities, it was not too difficult to convince the Legislature that the need was great for a new health, physical education and recreation building.

Near Christmas 1963 the new building was opened for its first athletic event. In the daytime the gymnasium, which included a 25-yard swimming pool, became a classroom. In the evening it served varsity athletics and recreation. For a while there were adult education classes, giving the building almost continuous usage from 8 a.m. until 10 p.m. 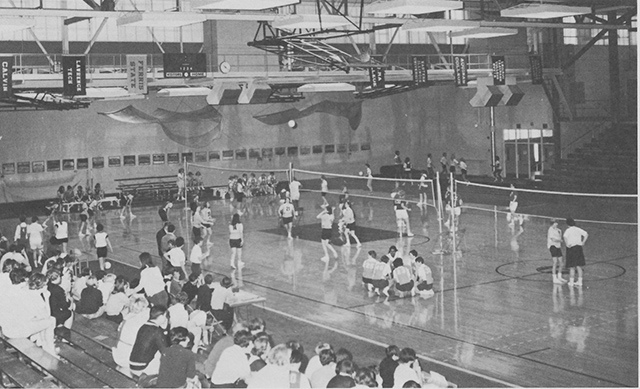 In December 1963, the Health and Physical Education Building was dedicated, opening in early 1964. It provided m8ich more space for athletic competition than the old Alumni Building gym. That gym was later converted to paddleball courts.

Next in the chronology of the multi-million dollar instructional buildings was the Swan Technical Arts Building, a five-story unit designed to house programs in the health sciences and the technical arts programs. It bore the name of Fred Swan, first dean of the School of Technical and Applied Arts, who led the development of many of the programs for which the facility provided space.

The Swan Technical Arts Building was dedicated in 1966, along with the Glenn Bond halls.

Enrollment was growing so fast that the buildings were filled almost before they were completed.

By 1967 the 10-year-old Science Hall and Trade and Industrial Center were already too crowded for competent instruction, and emergency measures were invoked, such as the renting of other space and the scheduling of classes until 10 p.m.

By this time the federal government was beginning to help subsidize instructional space on college and university campuses, especially science-oriented instructional buildings.

The Science Building was not in use until the winter term of 1967-68, but the Trade and Industrial Annex, a separate building housing additional trade and industrial programs, was completed in time for the start of school in the fall of 1967-68. 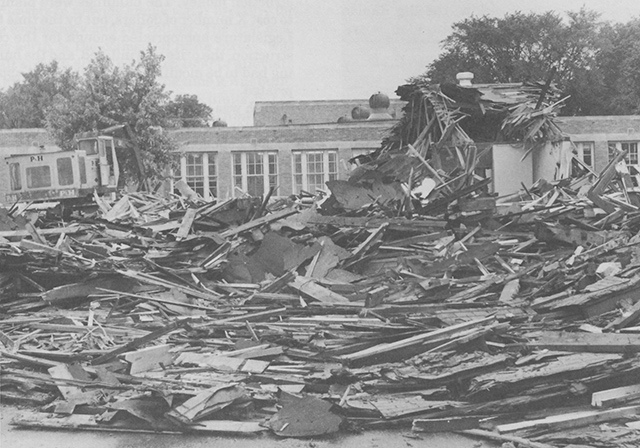 As the new campus went up, the old barracks, familiar sights at Ferris for many years, were tron down as their usefulness ended.

The 1966-67 school year saw the first use of the new Library which opened for student use on April 24, 1967. The Library Building was the first separate building for a library in the college's history.

Volunteer student help moved 100,000 items from the third floor of the West Building to the new three-story building during a 10-day period when both buildings were closed. The most feasible transfer system of books from one shelf to another was through the use of beer boxes, and many of the administrators who had raised eyebrows at the sight of a beer bottle on campus chuckled when they saw all the beer boxes going from the West Building to the Library.