The arts in a technical school setting took on a new meaning after Ferris became a state school in 1950.

The theory was that students at Ferris, even though the college offered no majors in music and drama, should have an opportunity to develop their talents in these fields while they were students. After their graduation they would be able to use whatever talents they had nurtured during their college years as an avocational interest. The same theory was in effect in the physical education programs -- students learned skills in sports that would carry over into their wage-earning life.

Thus in 1955 Dacho Dachoff was employed as director of music with a priority of establishing a comprehensive music program which would accommodate both well-trained and not-so-well-trained musicians into band and choral groups.

The idea was to provide for the students opportunities to participate in music groups at whatever level matched their ability. Students could earn credits for music activity electives. However, they could no longer major in music as they once could in Mr. Ferris' time.

Dachoff and his associates over the years developed music programs which brought considerable recognition to the school.

In 1977 President Ewigleben appointed Dachoff as Special Assistant to the President for the Arts; he also continued as Director of Music Activities. 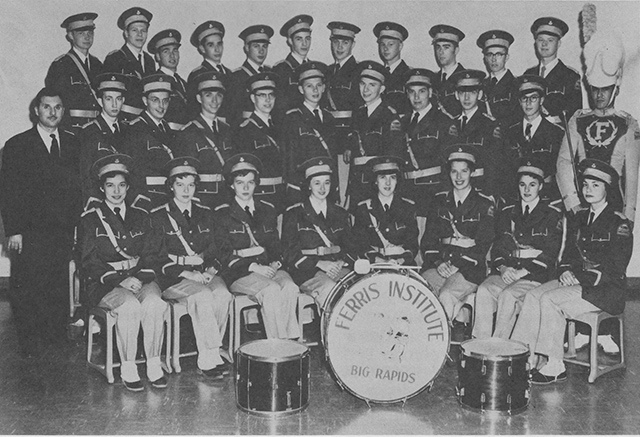 Aims for the arts programming as detailed in the President's Executive Memorandum of July 19, 1977 were:

"--To provide a broad array of opportunities and experiences in the arts so that students may have continuing contact with outstanding professional and amateur performing artists and thereby develop and grow in their awareness, perception, knowledge, understanding, responsiveness, appreciation, support and enjoyment of the arts.

"--To encourage, support, and provide the opportunities for Ferris students who express interest and demonstrate skills and competencies in the arts . . . to participate in such endeavors while at Ferris so they could develop their fullest potentialities under the guidance of capable teachers."

Students at Ferris should have an opportunity to develop their talents.

The theater concept had been introduced at Ferris in 1946 by Drs. Heddy and Oswald Rossi. Heddy Rossi had achieved considerable renown in the theater in her native Vienna before coming to the United States. 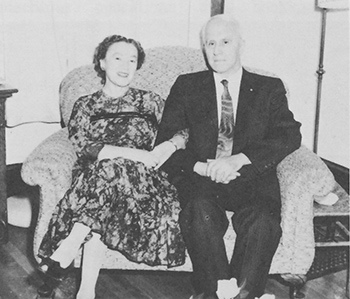 The Rossis directed the Ferris Playhouse until 1958 when they retired. During their 12 years working with students in the theater there was a scarcity of performers and the Rossis had to work in the incongruous quarters of the Alumni gymnasium which also was used for indoor athletic events and convocation programs.

When Lyle Mayer came to Ferris in 1958 to direct the Playhouse, he moved the action from the Alumni Gymnasium to a "theater-in-the-round" in the Dome Room of the Rankin Center. After the Starr Educational Center was completed in 1961, Mayer fought a continuous battle with the acoustics there for nearly 20 years of Playhouse productions.

When the Starr Educational Center was being designed, plans were to have a set of mechanically operated baffles which would be pitched one way for music and another way for speaking voices. However, when the building was completed there was not funding enough for such luxury as a mechanical ceiling. Thus the ceiling was made stationary.

In the 1958-59 school year, with the birth of the Festival of the Arts as one of the 75th anniversary features, students in the music and drama departments along with the arts and graphic arts areas displayed considerable talent in a month-long series of activities to which the public was invited.

The arts programs, too, developed a new concept with the state status of the College. Commercial Art came into being as the first program in the Collegiate Technical Terminal Division in the 1956-57 school year.

Under Mr. Ferris' aegis, drawing had been a very important discipline in the teacher training programs. He felt that classroom teachers should be able to draw well enough on the blackboard to spice up their lectures. One of the first teachers at the Industrial was hired to teach drawing.

Mayer fought a continuous battle with the acoustics.

It was not until 1963, however, when Richard Sessler came to the faculty that fine art was offered in the School of General Education as an elective for students who wanted to dabble in this form of creativity.

When the Living-Learning Center concept was phased out at the end of the spring term in 1972, an arts and crafts studio was allocated some space in that building. Here students had the opportunity to try their hand at art as an avocation.