Buildings were not the only things which were being structured at Ferris Institute in the mid-50's. Academic programs also needed attention.

By 1953, however, the Institute was separating the academic divisions into the College of Pharmacy, the College of Commerce, Teacher Training, General Education and Pre-Professional and the Division of Trades and Industry.

The first major pronouncement of Board of Control policy for the newly named state school came in the spring of 1953, with a statement from Judge Starr: 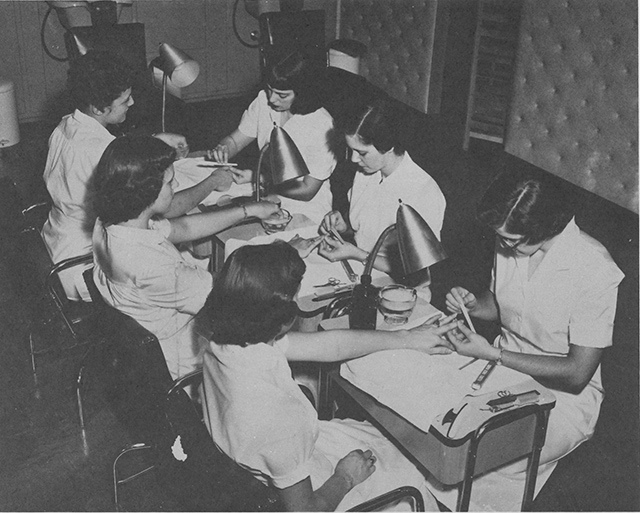 With the coming of state school status, the Board of Control decided to devote much of its efforts toward developing trades programs, such as cosmetology.
Automotive students, 1953

"The Institute should operate in accordance with policies and curricula established through the years." The Board of Control enumerated 10 major program objectives: Continue the degree program in pharmacy, concentrating on the retail drug field, continue the degree program in commerce, limited to selected specialties; continue degree programs for secondary school teachers in commerce and science; continue pre-professional and general education programs permitting one and two years work to be transferred to other colleges and universities; continue to expand high school completion programs for adults and those who need to make up work for college work; continue to expand women's non-degree vocational offerings; continue and expand non-degree trade and industrial programs for men;develop non-degree technological courses in limited occupations; continue and expand the evening school Community Education program on a regional basis; and develop regional educational service programs in cooperation with other public educational agencies through workshop, conference and classroom work. 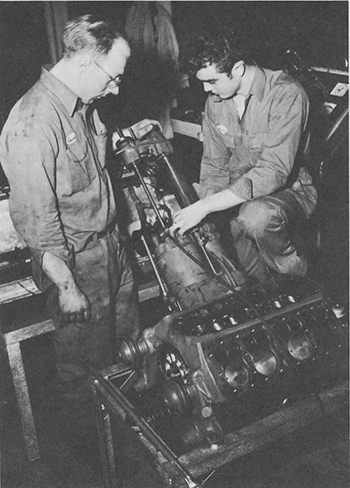 Upperclass male students were required to wear coats and ties to class.

The first of the academic divisions to come in for an overhaul was the General Education and Pre-Professional Division. Dr. Sebastian V. Martorana joined the faculty of that division as dean in 1955. Martorana began shaping up General Education, but was soon offered a job with the United States Office of Education (one of the agencies Mr. Ferris had often politicked for) as a community-junior college specialist, which he accepted. Ardwin Dolio succeeded him.

Second of the schools to come in for a tightening of its professional standards was Pharmacy. Dr. Edward P. Claus was appointed dean of the School of Pharmacy early in 1957. Until his death in 1970, his goal was to add finesse to the school. Claus was soon challenged with the problem of developing a five-year pharmacy program in accordance with a mandate by the American Council on Pharmaceutical Education that any student entering a pharmacy program after April 1, 1960, be required to complete five years of college instruction before he or she would be eligible to receive the B.S. degree in pharmacy. Claus imposed professional standards on the students, to the extent that upperclass male students were required to wear coats and ties to class and were not allowed to wear any unusual facial hair arrangements. 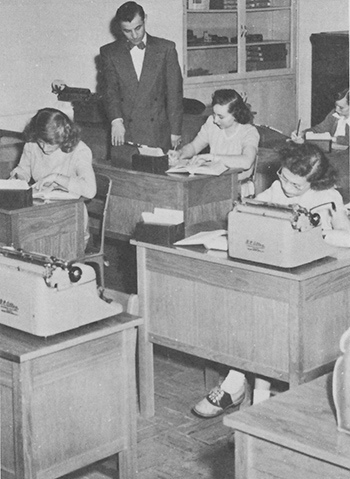 A refrigeration student in the 50's works on and old ice box. 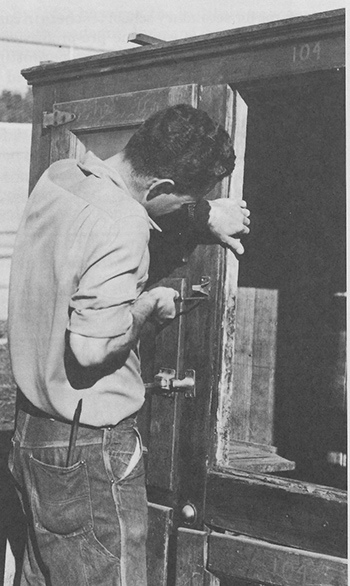 The business skills program was the closest thing to the original Industrial School offerings that the modern Institute could offer. It provided in a time as brief as 12 weeks hands-on business techniques, such as business machines operations and bookkeeping methods, which would allow the student to enter a business office as a wage earner.

The business skills program was the closes thing to the original Industrial school offerings.

Dolio later accepted a federal appointment in education and Huxol an appointment as a key administrator in the State Department of Education.

By the 1961-62 school year, the academic programs were divided much as they are today except for the College of Optometry, which was added in the 1975-76 school year.