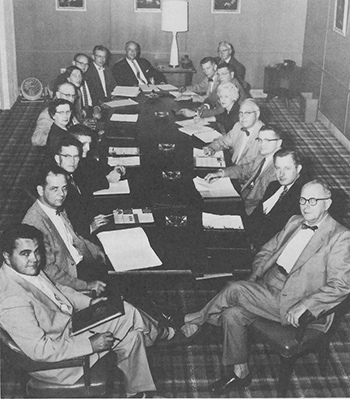 As the faculty grew at the newly designated state institution, and as a second attempt at accreditation approached, it became necessary for Ferris Institute to develop some sort of faculty advisory group to make recommendations on faculty concerns to the president.

Thus in the spring of 1956, President Spathelf appointed Fridolf Johnson, a political science teacher, to serve as chairman of the Representative Faculty Advisory Committee to draft a charter for a representative faculty organization. Each academic division was requested to name two representatives to serve on the committee. At first it met at the discretion of the President.

In the 1957-58 school year, the charter was adopted at a general faculty meeting held in Pearson Auditorium of the Science Building.

The name was changed to the Representative Faculty Advisory Council, and Johnson was elected first chairman of the council. In 1959 he was elected to a second term.