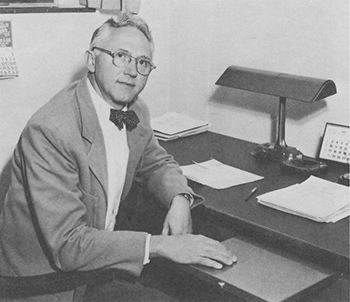 President Spathelf soon realized that he couldn't handle all this tremendous planned growth and development alone, and in the spring of 1953 he persuaded his long-time friend John R. Smith to come to Ferris as his assistant. At that time Smith had served for 23 years in the Highland Park, Mich., school system and was then the assistant superintendent. He also had just been re-elected mayor of Highland Park. Smith took over the business operations of the school. In 1966 he was named vice president for Business Operations. From Dec. 16, 1970 until March, 1971 he served as acting president until Robert Ewigleben took over.

In its game plan, devised shortly after Spathelf arrived on the scene, the Board of Control had determined that two of the Institute's major goals would be the development of a strong trades program and the upgrading of the pharmacy program.

To this end the budget requests to the Legislature included petitions for appropriations for a science hall and a trade and industrial center. The first wing of the Science Building, which housed laboratories and classrooms for pharmacy and science, was finished in late 1956. The Trade and Industrial Center was completed in 1957. It housed a myriad of trade courses which had been scattered around off campus and in war surplus barracks on campus.

Among the other things which the Board told Spathelf was that he should find a president's house, but after seeing the conditions in which the students were living, Spathelf said, "It's more important for the students to have a place to live than for the president to have a house." Spathelf bought his own house and began work on the residence halls. 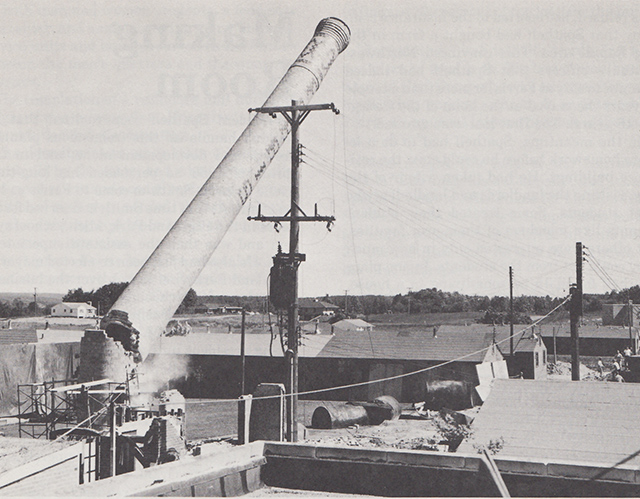 When the Old Main tower fell in 1950, many people thought that it meant the end of the school; when these chimneys fell in 1955, it meant the beginning of the new era.
Soon the south end of the campus (the part which is now just south of Campus Drive) was in the throes of excavation, a pattern which has continued on the campus since then. Masselink Commons was underway.

The building of Masselink Commons was accompanied by the erection of six apartment buildings for married students. Each building accommodated six families. These were provided for student families who had been living in "Fertile Valley," a group of army barracks which had been converted to apartments and were located along the river 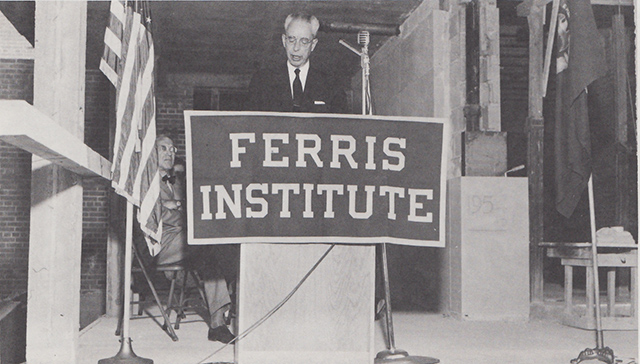 where the sewage disposal plant is now located. It derived its name from the burgeoning birth rate among families who lived there.

Judge Starr gave the keynote address at he dedication of Masselink Commons in 1955.

Each of the Campus Heights (that was the name given them) Apartments had its own self-contained heating unit and water heater, but Masselink Commons and future residence halls and planned instructional buildings were to be heated from a central system. Thus this embryonic development program required its own heating plant and services building.

Before 1955, quarters like these housed married students. The "barracks" were located along the river, near the sewage disposal plant. Because of the relatively high number of babies born to the couples who lived there, this collection of converted barracks was affectionately known as "Fertile Valley."

When students came to the campus for the fall term of 1955-56 they found a new "Institute" -- the East (now called Prakken) Building and the Alumni Building served as classrooms, and the West Building as administrative and faculty offices. Masselink Commons was a wonderfully versatile building. It housed 350 students (later an addition was built to accommodate about 90 more); it had a food service unit which provided the daily meals for its residents, and it had a snack bar where residents and nonresidents could get between-meal snacks. It also had a formal lounge where students could sit and visit, where boy could meet girl, carefully chaperoned. It had a lower lounge where game equipment could be moved out for dances, and it had offices for student publications and other student organizations. There were some smaller rooms on the lower floor where students and faculty could have group meetings or get meals. 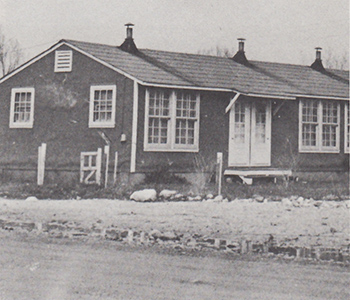 The Campus Heights buildings at that time were located across Ives Avenue in a remote corner of the campus. They, too, were marvels for the Institute. Each unit had a bedroom, a living room, a kitchen/dinette, and a bath -- all newly furnished. Some of the apartments had two bedrooms, but it was up to the tenant to furnish the second bedroom. Washers and dryers were also provided. Compared to the accommodations of "Fertile Valley," Campus Heights units were mansions.

Max Smith, brother of Colin Smith who had played such a major role in the transferral of the school to the state, was appointed director of residence halls and food services, and he began a comprehensive program of administering these units.

In 1956, Helen Gillespie Ferris Hall was added, as were three more Campus Heights buildings. Helen Gillespie Ferris Hall was intended as a women's dormitory, but the first year there weren't enough young women enrollees to fill it, and the female students were reassigned to one wing of Masselink while the surplus men took over the new residence hall.

There followed a carefully developed plan which added residence hall facilities to the campus each year for the next decade as the enrollment continued to swell.